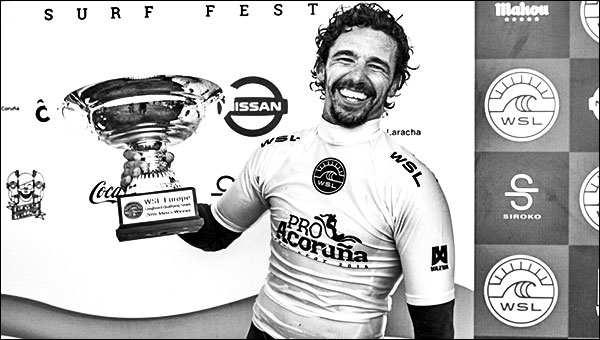 The A Coruña Longboard pro ends up for Antoine Delpero with a 3rd consecutive victory on the LQS and a European Title.

Antoine Delpero and Rachael Tilly have taken out the Longboard Pro A Coruña in clean, building three-to-five foot surf at the secondary venue of Playa de Caion.
Competition resumed with the longboard Semifinals early this morning before going on a long break through the low tide to recommence at 5:30 p.m. with the remaining few heats of both the longboard and junior events.

Antoine Delpero (FRA), 30, once again dominated the longboard field and claimed his third consecutive regional event win, belting the highly coveted European Longboard Champion title in the process. The Frenchman found two excellent waves in the opening minutes of the final heat and surfed them with a mixed approach of classic nose-riding and strong closeout hacks for a combined heat total of 15.13.

“It’s been a strange event with really small waves to start with, a lot of waiting to culminate with finals in big, closing-out surf so it was real complicated,” he said. “I’ve had this cool little routine going into the last few events, I really just want to enjoy myself, surf smart and catch the two waves I need to win heats. I’ve felt less pressure and I feel like I keep improving so that’s very positive. The level here in Europe is really high, we had the chance to welcome international competitors as well and I hope one of us can get that World Title soon.”