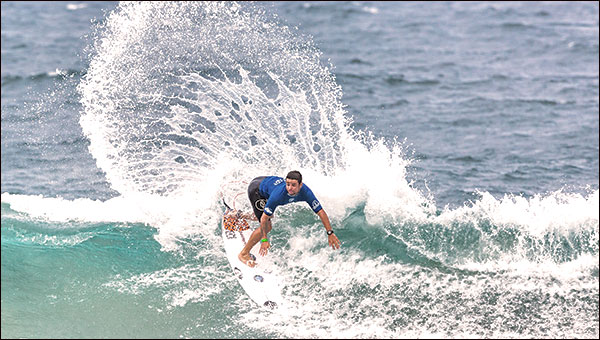 Silva and 2018 event runner-up Freestone, both members of the Top 32 ranked surfers on the elite WSL Championship Tour (CT), opted for a power surfing strategy on Finals Day. In the 35 minute Final, Silva started strongly by unleashing three massive backhand turns for an excellent 8.33 out of 10, which immediately put his opponent under pressure.

Freestone could only produce a series of low-scoring rides before Silva picked up a beautiful set wave and delivered two gravity-defying manoeuvres that the judges rewarded with a near-perfect 9.3. That put the Australian into a combination situation and needing to find two new scores totaling 17.64 before time ran out and he had to settle for second successive runner-up finish.

“This is the best thing in my life right now!” said Silva. “I’m so happy I got two good waves in that heat because Jack (Freestone) surfs so well, so I just thank God for giving me those two waves. The waves are good, even though the wind is strong, and I got that one big wave for two manoeuvres, so I am stoked.”

Freestone looked incredibly comfortable on the last day of competition as he proceeded through the Quarterfinals and Semifinals on his way to his second successive Final at Ballito.

“Of course I wanted to win it, but I’m so stoked to be in the final again, back to back years,” said Freestone. “It just gives me something to work for next year. In that final I felt so confident, it’s just the waves that got incredibly hard, so I can’t wait to carry this momentum feeling of God into J-Bay.”

The two-time WSL World Junior Champion controlled the first Semifinal against Jorgann Couzinet (FRA) by performing big hits on the waves he rode while Couzinet fell on several of his rides. The Frenchman made a comeback towards the end of the encounter, but could not find the required score.

Silva dominated his Semifinal clash against Wade Carmichael (AUS) with excellent wave selection. The eventual winner looked lethal on his backhand, smashing the chunky walls for a total of 11.60 to move into the Final, while Carmichael had took home another 3rd place finish at Ballito.

Although Couzinet did not reach the final, he was awarded the WSL wildcard into the Corona Open J-Bay as the highest placed surfer on the QS rankings not seeded into the CT event, which starts in Jeffreys Bay on Tuesday.

“At the end of the heat I thought I got the score, but I’m so stoked to get into J-Bay!” said Couzinet. “It’s the dream, I’ll have a good sleep tonight. I came here thinking of making quarters, so a semifinal is amazing. It’s a big dream to surf J-Bay, I feel like I’m going to cry!”