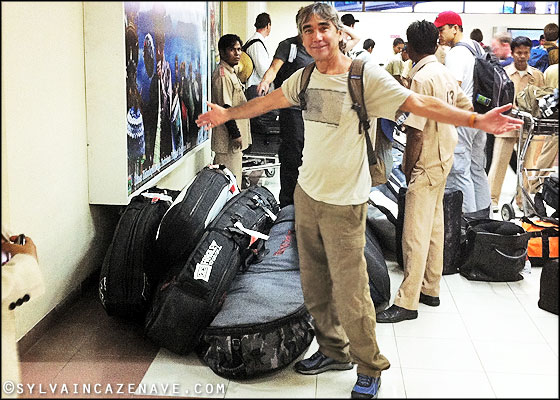 What Is The Cheapest European Airline For Carrying Surfboards?

Airlines can be buggers. We’ve lost count of the number of times we’ve been stung by baggage charges at the airport.

Why is it always at 3am, when you’ve hardly had any sleep, and you’ve already spent 45 minutes waiting in the check-in queue? The bastards…

Some airlines will let you use your free hold baggage allowance for your surfboard, but most won’t because board bags are much bigger than their size allowance.

You’ve also got to watch out for the weight of your boardbag. While airlines have a standard fee for surfboards, they’re happy to whack on an extra fine per kilogram if you go over the stated weight allowance. So, watch out!

So what is the cheapest European airline for carrying surfboards?

These were correct as of 16/05/14. However, we do recommend double-checking with the airline before you fly.

British Airways and Finnair. Well, technically they carry surfboards for free – but they only take surfboards under 6’3″, which rules out any longboarders and, errrr, pretty much everyone else.

Editor’s Note: We’ve had a comment from our reader, telling us SAS fly surfboards for free with max. weight of 23kg and no length restrictions. So sounds like they’re our new top surf-friendly airline!

And the most expensive?

Iberia, by far. Despite being under new ownership by British Airways, the Spanish airline charge a whopping €150 one-way charge to carry a surfboard! You’d be better off driving…

Unsurprisingly, Europe’s “budget” airlines come second for most expensive surfboard fees. Norwegian charges up to €120 return, while RyanAir, Swiss Air and TAP Portugal will relieve you of €100 return for the pleasure of carrying your board.

Looking for a good breakdown of international airline charges? We like this one from Wave Tribe Company.