In addition to the year’s first elite surfing event, today marked the first CT event to award equal prize money to the female and male competitors following WSL’s commitment in September last year. Each stop on the Championship Tour, in 2019 and beyond, will award equal prize money and continue to host the Rising Tides – WSL Girls Program, the beachside engagement program aimed to inspire the next generation of young girls to take to the surf.

The 2019 CT is also the first opportunity for the world’s best surfers to qualify for the Olympic Games Tokyo 2020, where surfing will make its Olympic debut. The Championship Tour rankings at the end of this season will determine 18 of the 40 available places (10 men and 8 women). After today’s results, the surfers are one step closer to both qualifying for the Olympics and winning the prestigious WSL World Title. 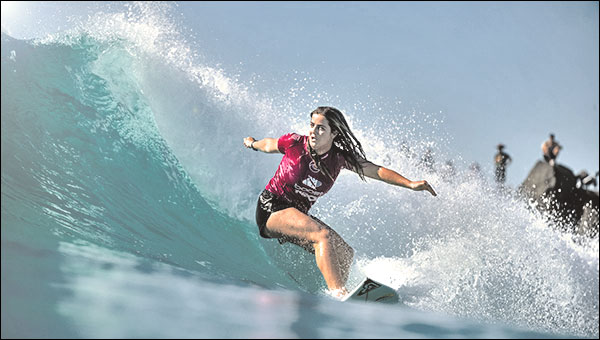 Teenager Caroline Marks Is Now #1 in the World

17-year-old Marks earned her career-first event win today and vaults to No. 1 on the World Rankings. With only one year on the CT to her name, the young competitor is off to a phenomenal start in her career, already reaching the very top to set the tone for the year ahead.

“I’m really emotional right now,” Marks said. “I can’t believe it. I’m speechless. It’s incredible to be a part of this sport. I just want to thank everyone at WSL, I’m so grateful. It’s so amazing to be a part of women’s surfing. Carissa (Moore) has always been my hero and she still is. To have my first win over her is incredible. I was actually laughing because the first time I came to this event I was in the Trials and I just lost in the first heat every single time, so to now win the event is amazing. This has been the best event and best week of my life. There’s still a lot of work to do for the rest of the year, but I’m definitely going to enjoy this moment.”

En route to her first win, Marks defeated seven-time WSL Champion Stephanie Gilmore (AUS) in the Quarterfinals, Malia Manuel (HAW) in the Semifinals, and three-time WSL Champion Carissa Moore (HAW) in the Final. Marks now leads the world’s best surfers heading into Stop No. 2 of 10, the Rip Curl Pro Bells Beach, where she will fight to maintain her lead over the field.

“I can’t wait to see where this result will take me this year and I’m really excited to get to the next event and hopefully get on a roll,” continued Marks. “Bells Beach is one of my favorite waves in the world and I feel like it really suits my surfing, so I’m stoked to be surfing there next week.”

After finishing World No. 3 in 2018, three-time WSL Champion Moore came into this first event with momentum. The former two-time Gold Coast event winner was on fire all week with some of the best scores, but in the Final, Moore struggled to find a wave that would allow her to take the 22nd event win of her career. Moore now heads to the Rip Curl Pro Bells Beach, an event she has won three times, with her best start to the season since 2015, the same year that she won her last World Title.

“This event was a real whirlwind,” said Moore. “I can’t believe we started a few days ago and we’re already done. I had some great matchups throughout the week and I knew coming against Caroline (Marks) was going to be really tough as she is a really amazing surfer. I want to congratulate Caroline on such a huge win and thanks to everyone for coming and showing support. I feel really thankful to be here competing on the Gold Coast again.”

In 2018, Ferreira proved himself to be one of the most exciting surfers, winning three CT events and finishing the year in fourth place on the Jeep Leaderboard. Today, the 24-year-old got his World Title campaign off to a perfect start with a come-from-behind victory over Californian Kolohe Andino (USA). Ferreira will now sport the Jeep Leader Jersey and focus his attention to Stop No. 2 of 11 on the men’s CT.

“Winning this event at the start of the year is unbelievable, ” Ferreira said. “I knew it would be so hard to beat Kolohe (Andino). I feel really lucky to have beaten him and especially in waves like this. The support on the beach is so unreal. I love all of the Brasilians on the beach. They are incredible cheering us all on. I’m excited to be in the Jeep Leader Jersey again, but it is a long year and I don’t want to get too far ahead of myself. I have a lot of other events to focus on, starting with Bells next week. I’ve trained a lot in the last three months and I got the win in the first event of the year. Let’s do this!”

Ferreira eliminated the in-form Jordy Smith (ZAF) in the Semifinals and Wade Carmichael (AUS) in the Quarterfinals. The innovative surfer posted some of the event’s highest scores in the earlier rounds, while also winning the Red Bull Airborne Gold Coast at the start of the waiting period.

Having had four previous Finals appearances in his career, including the 2016 Quiksilver Pro Gold Coast, Californian prodigy Andino was hoping today would be the day that he would clinch his first CT win. Unfortunately, he lost in the dying seconds to Ferreira. Although disappointed, the American acknowledges that the second-place result puts him in a great position from the first stop of the long season ahead.

“I was stoked to be in the Final with Italo (Ferreira),” Andino said. “I let that wave go, but I think ten times out of ten, I would let it go again just because it was actually a knee high wave (laughs), but he did a full rotation, so good on him. It’s a bummer I wasn’t getting chaired up for my first event win but it’s a long year and still a great result. I was two minutes away from winning that one. The American surfers are doing great, it’s rad to see. I think everyone is sick of seeing those top three guys on tour win every event. I think everyone’s put their heads down and trying really hard and it’s great for the sport.”

After almost a decade of competing on the WSL Championship Tour, two-time WSL Champion John John Florence (HAW) has only made the Semifinals twice at the Quiksilver Pro Gold Coast, once in 2017 and again today. Florence eliminated Conner Coffin (USA) in the Quarterfinals but was stopped by Andino in the Semifinals this morning. Florence recently returned to full-time competition after a sidelining knee injury and now sits in third on the Jeep Leaderboard heading into the next event.

Two-time WSL Champion Gabriel Medina (BRA) was eliminated by Jordy Smith (ZAF) in Quarterfinal 3. Medina was a standout at D-Bah, posting the highest heat total of the entire event during the earlier rounds. On Finals Day, however, Medina was unable to find two decent scores and finished the event in equal 5th place meaning he will head to Bells without the Jeep Leader Jersey.

“It was really hard to find the opportunities out there,” Medina said. “Yesterday was really fun, I was surfing D-Bah and it was pumping, but they were trying to make it at Snapper. That was a hard one. Heading onto Bells now. Hopefully, the waves will be better at Bells and there will be more opportunities. I just want to thank all my fans around the world, thanks for all the love and support and I’ll see you at Bells.”

Although he was disappointed to go down to Andino in the Quarterfinals, 2019 CT Rookie Seth Moniz (HAW) got his rookie year off to an incredible start by finishing in Equal 5th place at the Quiksilver Pro Gold Coast, taking down some big names along the way. Moniz will now shift his focus to Bells Beach and hope to increase his lead in the race for Rookie of the Year when competition kicks off next week.

The last Australians left in the draw, Sally Fitzgibbons and Wade Carmichael, fell to Moore and Ferreira, respectively. Fitzgibbons will exit with an Equal 3rd place finish, while Carmichael leaves in Equal 5th.