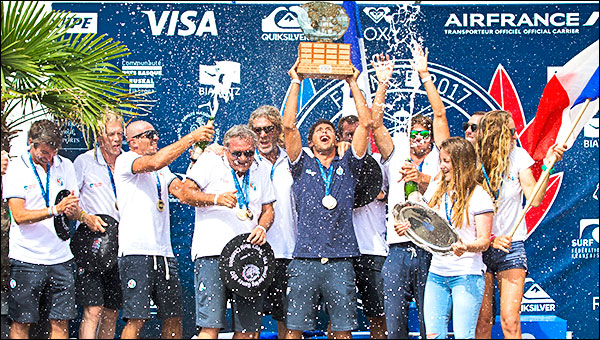 A historic week of competition at the 2017 ISA World Surfing Games in Biarritz, France concluded on Sunday as an edition to go down in the record books. Mexico’s 18-year-old prodigy Jhony Corzo earned the Gold Medal in the Open Men’s Division, the first-ever individual Medal for Team Mexico that also propelled his team to their first Medal in history with the overall Copper.

“It’s an amazing feeling to be crowned World Champion! I don’t have words for it. This is something that I wanted ever since I was young and started surfing. This is my first time competing in the ISA World Surfing Games and I got the Gold. It’s a dream come true.”

Rounding out the podium for the Open Men’s Division were France’s Joan Duru with the Silver Medal, Portugal’s Pedro Henrique with the Bronze Medal, and Spain’s Jonathan González with the Copper Medal.

Team France got off to a blazing start in the week-long competition with the dominant Gold and Silver Medal performances of Pauline Ado and Johanne Defay in the Women’s Division on May 22. The French Men also dominated their side of the competition, complimenting their Gold Medal that was clinched after Saturday’s competition with the individual Silver Medal of Duru and Semifinal finish of Jeremy Flores.

Team Portugal earned the Team Silver Medal for an impressive third consecutive year. Team Spain finished their solid run in the event with the Bronze Medal and Team Mexico took the Copper, their first time standing on the medal podium in the event’s history.

“Congratulations to the Team Gold Medalist, Team France, and the individual Gold Medalists Johny Corzo and Pauline Ado. Jhony and Pauline will stake their names in history as ISA World Champions crowned in Biarritz along with legendary surfer Tom Curren. As all the other ISA competitors, they surfed in true Olympic spirit, for the honor of representing their countries.

“Forty-seven nations came together from around the world to surf in this record-breaking ISA World Surfing Games for a phenomenal week of surfing and team camaraderie. We are watching the sport grow before our eyes, with excellent surfers coming from all five continents and many new nations joining the international Surfing family. In three years’ time, we will look back on this moment and remember which Olympians in Tokyo 2020 competed in this edition of the event.”

Sunday morning kicked off with waist to chest high waves and clean conditions at Grande Plage. The Open Men’s first Semifinal took to the water where Mexico’s Jhony Corzo ignited his run for Gold. After falling behind early, Corzo found a combo of waves that gave him a heat total of 13.70 and sent him into the Final along with Portugal Pedro Henrique. France’s Jeremy Flores was unable to find waves with scoring potential and finished fourth in the heat, bowing from the competition along with Spain’s Vicente Romero.

In the second Semifinal the European surfers prevailed, as Jonathan Gonzalez’s (ESP) 13.90 and Joan Duru’s 13.17 sent them through to the finals, eliminating Morocco’s Yassine Ramdani and USA’s Jordy Collins, who both had inspiring performances deep into the competition.

The final got underway as the tide approached its lowest point, drastically changing the shape of the wave at Grande Plage. Jhony Corzo notched an impressive ride in the excellent range, which when coupled with a solid back up sore of 6.33, launched him into first position. In the dying minutes of the heat France’s Joan Duru landed an air reverse in a last-ditch effort to catch Corzo, needing a high seven-point ride that came up short as a 7.23. Team Mexico let out a sigh of relief and stormed out into the tide to greet their World Champion. Portugal’s Pedro Henrique followed in third place with the Bronze Medal and Spain’s Jonathan Gonzalez less than a point behind Henrique with the Copper Medal.

To cap off the week of competition, the athletes from the top eight countries from the 2016 ISA World Surfing Games in Costa Rica competed in the ISA Aloha Cup, a tag-team style competition featuring four men and one women on each team. Each athlete rode a total of two waves during the 45-minute-long heats, where the waves from all five team members were summed to get the total team score.

In the Final, Team France emerged victorious in front of the crowd at Grande Plage, giving them another spot atop one of the event’s podiums. Team Portugal challenged France until the end of the Final, but couldn’t match high scores from the powerful French surfers, finishing with the Silver Medal. Peru earned the Bronze and USA finished with the Copper.