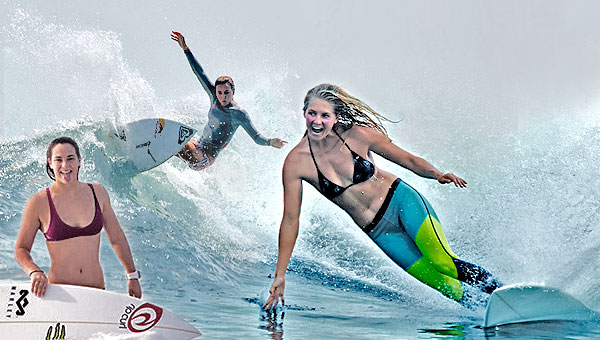 The final stop on the 2014 Samsung Galaxy ASP Women’s World Championship Tour (WCT) the Target Maui Pro presented by Schick Hydro Silk, gets underway tomorrow.
The event will be held from November 22 through December 6, 2014 at the world-class pointbreak of Honolua Bay and will see a culmination to this season’s thrilling ASP World Title race.

“Maui as the season-ender to the elite women’s schedule is a great way finish an unbelievable year,” Jessi Miley-Dyer, ASP Womens’ Commissioner, said. “Honolua Bay is truly a world-class wave and the Target Maui Pro is the perfect place to conclude the most exciting title race in the history of women’s surfing.”

Having been a regular stop on the women’s Tour from 1999 until 2009, Maui returns to the schedule this year and the event will determine the 2014 ASP Women’s World Champion. The world’s best female surfers will travel to the region for the last contest of the season, but only three remain in contention to take the Title in Maui: Australians Stephanie Gilmore, Sally Fitzgibbons and Tyler Wright. The trio will battle the waves, Only Fitzgibbons and Gilmore can win the World Title without a surf-off.

The Target Maui Pro also offers valuable points for those surfers looking to requalify for next year’s Tour. Only the top ten finishers on the 2014 WCT rankings will join the Top 17 in 2015. The remaining places will be awarded to the top six finishers on the ASP Qualifying Series (QS) rankings (barring those who’ve qualified through the WCT) plus an ASP wildcard.

Paige Alms (HAW) has been selected as the wildcard for the Target Maui Pro and she will join the ASP Top 17 to complete the field for the event. Alms, a former QS campaigner, is a Maui native and her knowledge of Honolua Bay and big wave prowess poses her as a real threat to her competitors. She will face Gilmore and fellow Hawaiian Coco Ho in Round 1.

Watch all the action from the Target Maui Pro LIVE at ASPWorldTour.com.