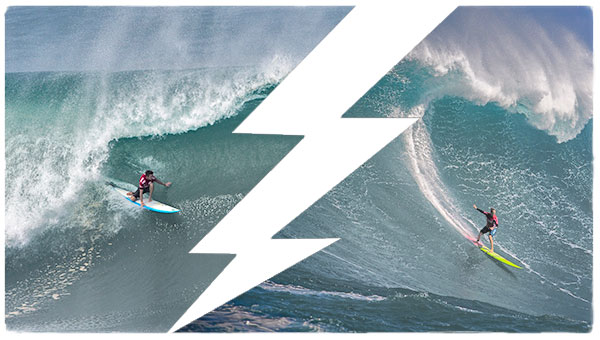 Los Aangeles, CA/USA (Tuesday, February 28, 2017) – With the conclusion of the 2016/2017 World Surf League (WSL) Big Wave Tour (BWT) today, Grant “Twiggy” Baker (ZAF) and Paige Alms (HAW) claim the WSL BWT men’s and women’s titles.
Today’s achievement marks Baker’s second BWT title clinching, after securing his first in 2013. Baker took on all three events that ran on this year’s men’s BWT, kicking off his yearlong lead with an emphatic victory at the Puerto Escondido Challenge. The South African then continued to carry the momentum to a strong showing at the Pe’ahi Challenge, where he captured the 3rd place trophy. Baker solidified his position atop the rankings after a Semifinal finish at the inaugural Nazaré Challenge.

“To be the Big Wave Tour Champion means the world to me,” Baker said. “I put in a lot of time and effort into this year and it is amazing that it has paid off. I got married two years ago and had a daughter last year, so my priorities to surf big waves have definitely changed to give them the best possible future. They drive me to catch bigger waves. This year, everything came together in the contests. I did what I had to do competitively and it feels good. I am super stoked.”
Baker started his incredible career in 2003 with a Finals appearance at his first ever big wave event at Dungeons in South Africa. Since then, the South African has continued to push the limits of big wave surfing with numerous event wins at venues ranging from Maverick’s in California to Punta de Lobos in Chile to Punta Galea in the Basque Country of Spain. Additionally, Baker’s remarkable career is brimming with accolades from the Big Wave Awards, and today’s victory further cements his place in surfing history.
“The progression of big wave surfing in the past few years has been exponential,” continued Baker. “The competition side is pushing the performance level of the sport. What this title means for me is that we are getting something going for the future. We are building something for the kids that are coming up now. The Championship means a lot and it is a great feeling to have that pressure off and to win.”
Baker completed his season with 25,018 points on the year-end rankings, edging out the 20-year old Brazilian charger, Pedro Calado (BRA), by 3,075 points. Two-time BWT Champion Greg Long (USA) came in third place with a total of 22,921 points.