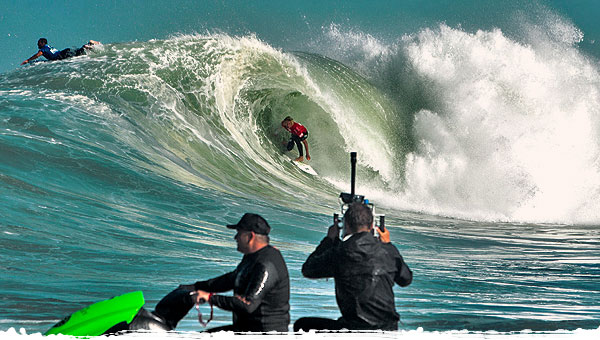 Event No. 9 of 11 on the 2014 Samsung Galaxy ASP World Championship Tour, the Quiksilver Pro France existed as a crucial stop in the hunt for this year’s world surfing crown as well as a critical opportunity for those looking to requalify for next season’s elite tour.

Florence proved the event’s form surfer from the outset, consistently notching up the highest scores of each round and surfing with unparalleled comfort and confidence in the ever-changing conditions. His win over Jadson Andre (BRA) was secured with committed barrel rides as well as power surfing and marks the second WCT victory of his career (the first being in Brazil in 2012).

“It has felt like such a long event and I’m so pumped to get the win in the end,” Florence said. “We’ve had every type of condition for this event and even finishing in barrels was a lot of work. There was a lot of water moving out there and Jadson (Andre) was always going to be a tough opponent. He looked super strong against Jordy (Smith) in the Semi. Pumped on the win here and the support from the crowd was really impressive.”

After a sporadic start to the year, the young Hawaiian has been on a roll in recent events, collecting a 3rd in Tahiti and a Runner-Up finish in Trestles before today’s win in the South of France. Florence has moved from 8th to 5th on the ASP WCT rankings and has vaulted himself into contention for the 2014 world surfing crown.
“I’m really pumped with my results lately,” Florence said. “I had a few weird things happen for me at the start of the year and I’ve made some adjustments recently. I’ve spoken to a lot of guys about the title and they all say that the title campaign actually starts the year before. I’m hoping for a few more good results this season to really make a run for it in 2015. I guess today’s win puts me in contention for this year, but Gabriel (Medina) is so far ahead that some weird stuff would have to happen.”

Andre’s runner-up finish marks the Brazilian’s first Finals’ berth since 2010, moving him from 29th on the rankings to 20th and currently inside the requalification cutoff.

“It’s been a long time since I got a result I’m happy with,” Andre said. “I feel like my surfing has been strong all year, but things haven’t gone my way. So stoked to make the Final and hopefully that builds momentum for me for the rest of the season.”

Josh Kerr (AUS), current ASP World No. 13, quietly worked his way through the event draw before creating a major upset in yesterday’s elimination of tour frontrunner Gabriel Medina (BRA) in their Quarterfinal match. Despite the collection of an impressive barrel in today’s Semifinal, Kerr was unable to overtake eventual winner Florence and finishes France with an Equal 3rd.

“I always knew John (Florence) was going to be a tough opponent out there,” Kerr said. “He’s been in rhythm with the ocean all event. When everyone else is struggling, he’s out there dropping 10s. I got one good wave, but that was about it. Semifinals feels good though. Breaks the curse somewhat in France for me so that’s good.”

Jordy Smith (ZAF), winner of the previous ASP WCT event in Southern California, was looking to go back- to-back with another victory in France. After eliminating Kelly Slater (USA) from competition in their morning Quarterfinal bout, Smith’s odds looked promising before falling to Andre in the Semifinals.

“Felt like I had a good heat against Kelly (Slater) then couldn’t buy a wave in my Semifinal,” Smith said. “Congrats to Jadson (Andre) though. He’s been surfing well all event and he’s hungry for a result. Looking forward to the next one.”

Kelly Slater (USA), 11-time ASP World Champion and current ASP World No. 2, was in position to capitalize on current frontrunner Gabriel Medina’s (BRA) Quarterfinal exit yesterday with a strong result in France. However, the iconic Floridian was unable to best opponent Jordy Smith (ZAF) in their morning match, and heads into the last two events with less opportunity to gain on the Brazilian’s lead.

“It was difficult out there today and I just found myself out of position for most of the heat,” Slater said. “I haven’t felt like I’ve been in a rhythm for most of the year. There have been moments, but replicating the feeling where you’re confident things are clicking just hasn’t happened. Still in the race, but today was a missed opportunity. We’ll see what happens in Portugal.”

The next stop on the 2014 Samsung Galaxy ASP World Championship Tour will be the Moche Rip Curl Pro Portugal from October 12 – 23, 2014.

Highlights from the Quiksilver Pro France are available at ASPWorldTour.com