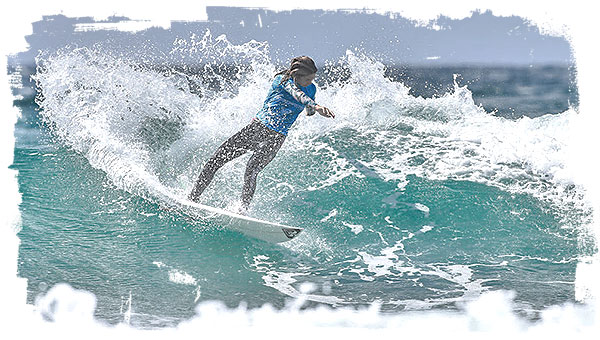 French born Roxy surfer Juliette Lacome, 15, just clinched her first major QS event title in Newquay, UK.
In the Roxy Open Final, the young surfer found a good right with multiple turns and posted a 6.00 to take an early lead, then used her priority in the final minutes to block her opponent Yolander Hopkins (PRT) on a good looking left and posted the highest score of the final, a good 6.17 to claim the title. This is her first-ever Qualifying Series event win after a title of French Champion in 2017 and three Maider titles in 2016 and 2017.

“My first final, I really did not want to miss it. So I told myself that I had to win! I kept calm and I didn’t want to be too happy because it was not over! It was important to stay focused! ”
“I was in the final against Yolander Hopkins. She won over Vahine Fierro and I was a bit disappointed because I wanted to make the final against Vahine, so that gave me some motivation for the win! I was a bit under pressure and the waves were kind hard to surf, but these are conditions I like! The tricker the waves, the more confident I am! I’m not a fan of perfect conditions! ”

The Roxy Girl also jumped a few spots up the regional rankings to the fifth position.

Juliette kicked off the Boardmasters with motivation and humility: “« I felt I was ready but I knew it was going to be a tough contest ! “

Born 13 January 2003 Nationality: French
Juliette was born in the French town of Bayonne, and started surfing at the age of 7 in Anglet and Biarritz, the heart of the French surfing paradise.
Her friends initiated her to surfing, straight to short board and it was love at first sight.
Her first competitions was in 2014 in Biarritz, at the age of 11. She competed with other friends and loved the competitive spirit.
She won the title of French Champion in 2017 and three Maider titles in 2016 and 2017.
She owes a lot to ROXY surfer Lee-Ann Curren: “She took me surfing, introduced me to the ROXY family and helped me become a ROXY girl. She was so patient with me and I really feel like she has been a huge part of my adventure so far.”
She is also inspired by Stephanie Gilmore,“a boss in the waves and in life!”
While studying in high-school she plans on competing as much as possible and dreams of representing France at the Olympics in a couple of years.