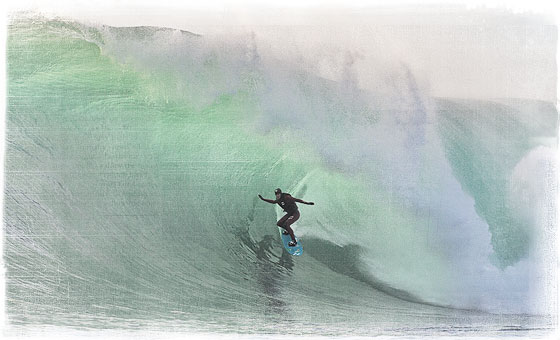 October 22, 2012 (Hossegor France,) – Justine Dupont has highlighted her big-wave credentials by threading a huge barrel at Ailleens on Ireland’s west coast on Sunday 21st October. The 21-year-old World Tour surfer travelled with the Billabong Adventure Division from her home in Lacanau, France to surf the big-wave spot. One wave in particular (pictured above) is considered to be one of the biggest tubes ever ridden by a female surfer in Europe.

“That was an amazing day of surfing,” Dupont said afterwards. “It was more than a session, it was a mission. From getting smashed paddling out to surfing that perfect beautiful wave, it was a day I’ll never forget.”

Dupont initially paddled out with Benjamin Sanchis, the 2011 Billabong XXL Biggest Wave Award Winner. However after both surfers broke their boards after being caught inside by the biggest set of the day, they elected to tow surf the infamous cold water righthander.

Billabong Adventure Division’s François Liets then towed Dupont into a solid 12+ foot bomb. Looking supremely comfortable in one of the world’s heaviest waves, the stylish natural footer backdoored a huge green barrel exiting with a huge spit to the roars of the surfers in the water and the spectators lining the cliffs.

“I want to say a huge thank you to all the Billabong Adventure Division team for the trust and confidence they gave me,” Dupont said. “They all accepted me in the team and that was my main goal. It’s also very beautiful here; the landscape and the cliffs give the wave and place a special mood. It was an incredible experience.”