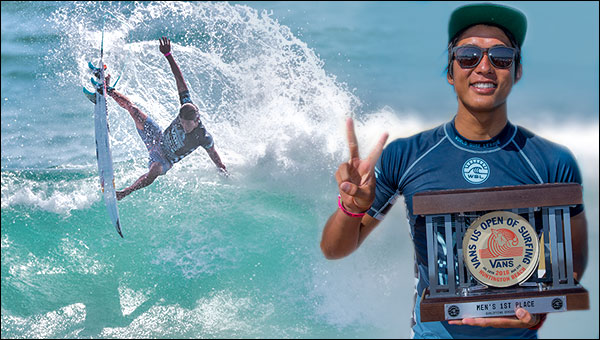 Kanoa Igarashi (JAP), 20, claimed a new victory last night at the US Open , a QS 10,000 event, on the southside of the Huntington Beach Pier (USA). The second win in a row for the young Japanese surfer.

Kanoa Igarashi and Griffin Colapinto surfed back-to-back waves and Kanoa delivered a real battle to keep his title. Led at the start of the heat, the Japanese never faltered to return to the score with a great wave scored 7.60 pts.

Defending champion, Kanoa took advantage of his unparalleled command of the Huntington spot to release a near-perfect series of tricks in the last seconds. He wins this crucial heat with 15.77 pts against 15.00 pts for his opponent.

“I barely remember that last ride, I feel like something just came over me and whatever I was going to do on that wave I was going to land it. It felt like as soon as I stood up on that wave I already got the score. That was the best feeling I’ve ever had. The whole contest I was just thinking about the Final. I paced myself throughout that whole contest and let everything out in that last heat. It was a really hard Final, but I just believed Huntington was going to give me the waves and it did” said Kanoa.

It was a tough final for the surfer whose family moved to Huntington Beach specifically to help propel his chances at becoming a pro.