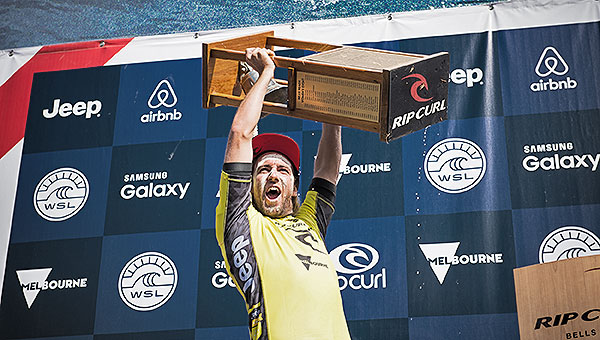 The second stop on the 2016 Samsung Galaxy WSL Championship Tour, the Rip Curl Pro Bells Beach is the longest-running professional surf event in the world and today proved nothing short of historic with Wilkinson’s victory being the first for a goofy-footer at Bells Beach in 17 years (last won by Mark Occhilupo in 1998).

Following a win at the opening stop of the season on the Gold Coast, the young Australian has gone back-to-back to start the year with today’s emphatic victory.

Holding a stunning lead on the rest of the field, Wilkinson will spearhead the world’s best surfers at the next stop on the CT, the Drug Aware Margaret River Pro, this coming week.

Today’s Final match-up witnessed Wilkinson and Smith exchange huge scores as each battled to hold the lead. Wilkinson unleashed his strong backhand to deliver vertical snaps, earning him a 9.20 and an 8.17, challenging Smith to find two new scores halfway through the Final. Smith finished with a 14.16 two-wave combined score, but it was not enough to beat the Australian’s 17.37 combined score.

“I have been trying to win everywhere forever and it has never happened, and this year I seem to keep picking up trophies, which is making me feel pretty good,” Wilkinson said, “I am so happy to be at Bells. I’ve been coming down to this event for so long, and I’ve always wanted to win it. I finally got my chance.”

“If you improve ten percent in ten different areas in your surfing, you are going to be one-hundred percent better,” continued Wilkinson. “I am on great boards, I feel fit, my surfing feels really good and I am making smarter decisions, such as keeping calm in tricky moments. I am just going to keep doing what I am doing and try to not make any mistakes and throw everything into every wave I catch.”

After suffering a string of injuries in 2015, Smith’s performance at Bells puts his WSL Title campaign back on track. Although Smith experienced an early Round 2 loss at the Quiksilver Pro Gold Coast, he made a major comeback by taking out CT heavyweights to earn a second place win at Bells Beach.

“Last year I had a back injury and struggled through it, but I am glad to make the Final here today,” Smith said. “This year was a little different for me at Bells. I did not have my expectations so high, and I wanted to put on a good performance and surf my best. I am just trying to put my head down and do the best surfing I can and work as hard as I can.”

Wilkinson blazed through Semifinal 1 against Italo Ferreira (BRA), the 2015 WSL Rookie of the Year. Wilkinson dropped a 17.27 two-wave combined score, including a huge 9.27, leaving Ferreira in a combination situation for the majority of the heat. Ferreira will end his run with his highest finish at the Rip Curl Pro Bells Beach event.

The second Semifinal witnessed an all out clash between Smith and Mick Fanning (AUS), three-time WSL Champion and four-time event winner. Fanning and Smith went wave-for-wave, but it was Smith who challenged Fanning with a 17.17. Fanning was not able to lock in solid completions on his massive finishing moves and will end his run at Bells Beach with a 3rd place finish.

The next stop on the 2016 Samsung Galaxy WSL Championship Tour will be the Drug Aware Margaret River Pro from April 8 – 19, 2016.

Highlights from the Rip Curl Pro Bells Beach are available at WorldSurfLeague.com.