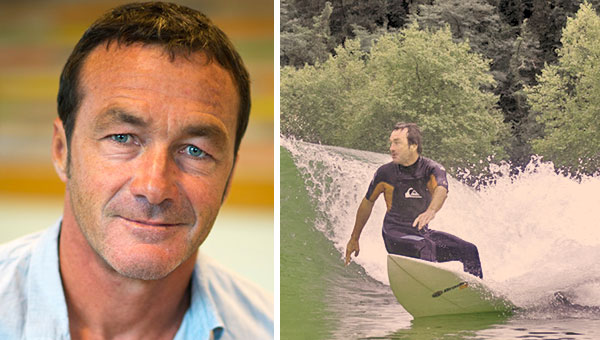 Remembering Pierre Agnes, one of the most extraordinary personality in the surf industry

Deeply disturbing news about Boardriders, Inc. CEO Pierre Agnès reached us on Tuesday. He took his boat out, the “Mascaret III” at around 7:30 in the morning from the port of Capbreton, to fish the chipiron. He sent a message to the captaincy to explain that he was going to postpone his return because of the fog. No more news after this last message.

The alert was given at 9:17, when his boat of 11 meters was found overturned, in the north of La Gravière spot. No one was found with the vessel. Later it has been removed from the beach. At the end of the afternoon, the research was still going on around Hossegor to try to find him. An impressive device was set up for the occasion where 4 ships and 2 helicopters were sent to sea. The beach was covered by four-wheel drive vehicles and rescue forces. The research continued until late at night and was restarted in the next morning.

In spite of all deployed rescue forces, they weren’t enough to find Pierre Agnès, CEO of Boardriders group (including Quiksilver, Roxy and DC Shoes brands). Wednesday afternoon, searches were suspended.

“St. Jean de Luz, France, Feb. 2, 2018 – Today we are deeply saddened to confirm that the search and rescue efforts have not been successful in locating our CEO, Pierre Agnes, who has been lost at sea since Tuesday morning. The entire Boardriders family and thousands of people he touched spanning the globe are mourning this tragic loss. Our thoughts and prayers are with his wife, children, family and friends in this extremely difficult time.

Pierre dedicated the past 30 years – his entire professional career – to Quiksilver, Boardriders and the surfing community. Our industry has lost a tremendous ambassador, visionary, and icon, and we have lost a dear friend and passionate leader.

Pierre loved the ocean, the surf industry, his hometown of Capbreton, France, our Company and our employees, who he considered family. He helped build Quiksilver into an industry leader, and leaves as his legacy the world’s leading action-sports company. We are committed to building upon his vision and continuing the Company’s success.

Thomas Chambolle, Chief Financial Officer and Jose Cledera, Head of HR for Boardriders, said: “We are devastated by the sudden and unexpected loss of Pierre. He was a vibrant spirit, a humble soul, a charismatic leader and our beloved friend. We join the entire surfing industry in mourning his loss. We are deeply grateful for the efforts of the search and rescue teams that worked tirelessly to find him, and for the outpouring of concern that has come from far and wide.”

Greg Healy, Global President for Boardriders, added: “The only solace we can take from this is that Pierre left us while doing something he loved – enjoying the vast and endless beauty of the ocean, which had been one of his life’s passions. His leadership left an exceptionally strong team at Boardriders. I know that he saw the resurgence and growth of Quiksilver and Boardriders as his legacy, and our teams around the world are committed to honoring his memory by carrying the business forward with the same passion and energy he infused in us all.”

The Company will host several memorials around the world to celebrate Pierre’s life and his many accomplishments. Details will be announced at a later date.”

Jérémy Florès, who considered Pierre as his second father, wrote:

I love this man. @pierre_agnes went missing in Hossegor today when his boat washed ashore in the cold, early morning fog. I’m praying for a miracle but it’s just starting to hit me what a profound effect this man had on my life and the surf community at large. He loved his morning fishing trips, family, @quiksilver, surfing, friends, motorbikes, Capbreton…I’m not even sure how to let it sink in. 😢

WSL expresses its deepest condolences to the family & friends of Pierre Agnes, who was lost at sea earlier this week. He was a true believer in the power of surfing and his passion, intellect & experience positively impacted the lives of many people around the world. We share the mourning and grief today at our loss. We consider ourselves very fortunate to have known him and to have shared our time and experience with him, both in surfing and in life. The full statement is on worldsurfleague.com


The Santocha Capbreton Surf Club organized today from 06:00pm to 08:00pm a vigil for Pierre Agnes at Club’s headquarters.

The Boardriders group specifies that several tributes will be organized around the world to honor the memory of Pierre Agnès. Details will be communicated at a later date.