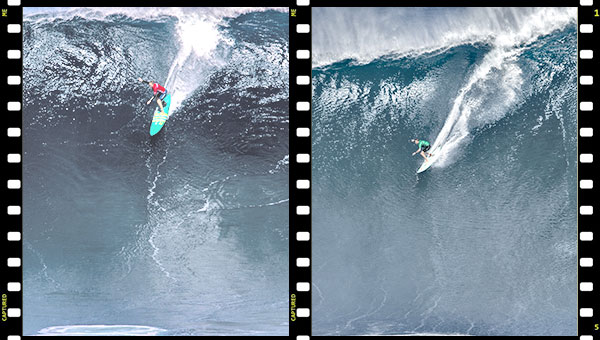 The second event of the 2017/2018 BWT season tested the top big wave chargers as a solid swell delivered massive surf over two days at Pe’ahi with wave faces exceeding 45 feet. Event officials have rated this year’s Pe’ahi Challenge a Gold coefficient, the highest possible BWT rating, which will allocate 15,625 points to first place.

“I feel so grateful to be able to sit out in an empty lineup at firing, perfect Jaws,” Alms said. “It doesn’t get much better than that. Every single one of the women today sent it on a bomb. There were big waves out there and I was kind of kicking myself for not going on one set, but I just feel super stoked and honored.”

The Women’s Pe’ahi Challenge saw all six competitors charge monstrous set waves in the 60-minute Final. Alms stayed selective throughout the Final, utilizing her local knowledge to take off on two gigantic waves for the winning score, an excellent 21.23 combined score (out of a possible 30).

“Anyone that says they’re not scared of this place, I think they’re lying,” continued Alms. “I think it’s the most powerful and intimidating big wave anywhere in the world, by far. I definitely look up to Ian (Walsh) and I’m super stoked that he won it. We couldn’t have asked for anything more – it definitely put on a show so thanks Pe’ahi!”

Walsh earned his career-first BWT victory after dominating his Round 1 heat and the Final series. The 34-year-old, who was invited to compete as an event wildcard, capitalized on his opportunity to earn first place at his home break in Haiku and vault up to third place on the BWT rankings.

“This is a really big honor and I’m stoked that I can follow Billy (Kemper) and keep this thing on Maui,” said Walsh. “It was an incredible couple days of surfing, some challenging lulls but everyone here surfed really, really well and it was a pleasure to be in the water with them. It was fun to watch each heat almost, our sport progress as the waves got bigger and better. It feels just like those big free surf days, so I’m really honored and stoked.”

The men’s Final saw heated battles amongst the top six competitors. 2014/15 BWT Champion Makuakai Rothman (HAW) gained an early lead with a 5.60, but the field quickly battled back with big attempts. Two-time Pe’ahi Challenge winner Billy Kemper (HAW) opened his campaign with a committed 5.43 and maintained his do-or-die mentality after taking off impossibly deep on an enormous wave for a 6.57 backup score.

Kai Lenny (HAW), winner of the Puerto Escondido Challenge and BWT rankings frontrunner ahead of Maui, narrowly missed a collision with Ryan Hipwood (AUS) in the Final after committing to an under-the-ledge late drop into a 35-foot wave. Lenny managed to successfully ride out his first wave and stamp out a rail-carve for a 6.93 from the judges, then found a 4.40 backup score to finish fourth in the event. Lenny’s result strengthens his lead on the BWT with Kemper following closely behind and Walsh moving up to third.

Big wave veteran and Pe‘ahi professional Greg Long (USA) displayed good control throughout the event and maintained deep positioning in the lineup during the Final. En route to a fifth-place finish, Long took a high-line approach on his first wave in a barrel-hunt attempt and completed two rides to the channel for a combined heat score of 14.67.

The men’s second Semifinal saw event-best performances from both Walsh and Hipwood. Both surfers dropped Perfect 10’s for navigating steep takeoffs and cavernous barrels, with Walsh flying through two tube sections prior to winning the event.

Ahead of his runner-up result, Kemper narrowly got the edge over Danilo Couto (BRA) and Mark Healey (HAW) in Semifinal 1. Knowing Healey’s capabilities at Pe‘ahi, Kemper stayed close to the 35-year-old waterman in order to secure his position in the Final. Couto kept busy on the left-hand breaks, but fell just 0.57 points short of advancing through to the Final and will exit in Equal 7th place.

Highlights from the Pe’ahi Challenge can be found at WorldSurfLeague.com, the WSL app and on the WSL’s Facebook page.

WSL Big Wave Tour officials will monitor swell producing storms for the next four months and watch for the conditions that will produce waves in the 30-to-60-foot range for the remaining Northern Hemisphere events. Once the call is made, competitors will have 72 hours notice to be ready to compete.