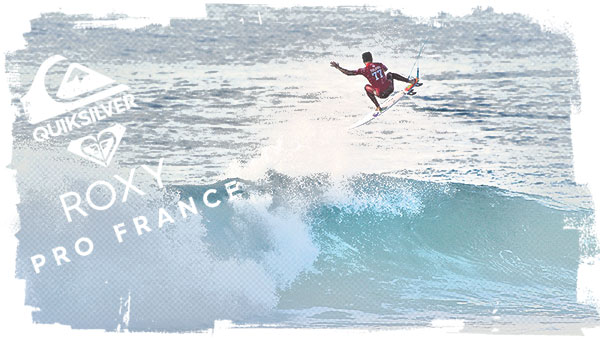 From the 7th to the 18th of October

This autumn, for the 16th consecutive year, France will once again welcome the world’s best surfers to the legendary beach-breaks of the Landes region for the sole French leg of the World Surf League’s pro tour – the Quiksilver & Roxy Pro France. Held from the 7th to the 18th of October in the iconic surf towns of Seignosse, Hossegor and Capbreton, the Quik Pro is the 9th stage of the 2017 Championship Tour. It’s a crucial stage of the tour, a true highlight of the season, and a favorite for fans and pros alike.
Every year, the combination of visiting surf stars and pumping barrels attracts tens of thousands of spectators to the spectacular beaches of the South West of France, the epicenter of European high performance surfing.

A Who’s Who of Surfing

Absent friends are also expected to make a welcome return to Landes: Quiksilver Pro Gold Coast 2017 winner Owen Wright (AUS) missed last year’s event following a serious injury in Hawaii, while Australian triple World Champion Mick Fanning is back from a sabbatical year off tour, and will no doubt be hungry for a repeat of his 2013 Quik Pro France victory.
Amongst the ladies, the queen of Hossegor is undoubtedly current WSL Champion, Tyler Wright. The Australian world No. 1 is at the top of her game and a favourite for 2017, but she can expect stiff competition from last year’s winner Carissa Moore (HAW), six-time World Champion Stephanie Gilmore (AUS), 2013 Roxy Pro France winner Sally Fitzgibbons (AUS), and 2016 World #2 Courtney Conlogue (USA) – they’re all going to be dangerous in the powerful Landes surf.

Never has France had such a strong presence on the dream tour. A French winner in France is still only a dream, but with Jérémy Florès, Joan Duru and the Tahitian Michel Bourez ready to represent in the men’s event, and the stunning duo of Johanne Defay and Pauline Ado in the ladies, hopes for a Tricolor victory are high.

There’s nothing quite like seeing a surfer emerge from a deep, powerful barrel, and every year the iconic French beaches seem to serve up the kind of quality waves that legends are made of – as past winners Kelly Slater, Gabriel Medina, John John Florence and Mick Fanning will no doubt testify. While the majority of Championship Tour events have fixed locations, the beauty of the French stage is its flexibility: as the alchemy of changing wind, swell and sandbanks leads, so the Quiksilver & Roxy Pro follows, to whichever beach the waves are working best.
It’s an exciting, enigmatic playground that’s as challenging in its way as any other stop on the tour. When the surf is pumping, the waves of Landes are powerful and unpredictable – mistakes are rarely forgiven – and victory here is always hard earned. Meanwhile, a strong performance in France can often seal the deal on a world title – as Tyler Wright showed us last year.