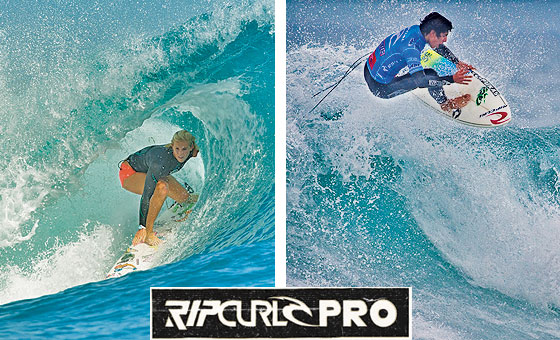 BELLS BEACH, Victoria/Australia (Wednesday, April 6, 2011) – Rip Curl is proud to welcome their two young superstars, Gabriel Medina (BRA) and Bethany Hamilton (HAW), to compete as wildcards in the 2011 Rip Curl Pro presented by FORD Bells Beach. For the second year in a row, Brazilian Gabriel Medina will face off against the ASP Men’s Top 34 surfers. Hawaii’s Bethany Hamilton will join the ASP Women’s Top 17 surfers as the sole female wildcard in the Rip Curl Women’s Pro presented by FORD Fiesta.

Gabriel Medina is Brazil’s latest surf export and he will be no easy feat for the Top 34. Last year as a wildcard at the Rip Curl Pro, Gabriel took out the likes of Chris Davidson and CJ Hobgood before falling to his idol, fellow Rip Curl teammate and 2-time ASP World Champion, Mick Fanning, in Round 3.

“I’ve gained a lot of experience since last year,” said Medina. “Competing against Mick Fanning twice last year helped me to learn how to compete better this year.”

Along with his dangerous first crack at the world’s top surfers in 2010, Gabriel netted the Rip Curl GromSeach International title and the ISA World Junior Championships Under-18 crown. And in-between all the competition, this 17-year-old phenomenon has been traveling the globe free-surfing, working to hone his skills and prepare for another assault on this year’s Top 34 at the 2011 Rip Curl Pro presented by FORD Ranger.

Known best for her heroic comeback from a shark attack in 2003, Bethany Hamilton has been stunning the world ever since with her talent in the pro ranks. Whether the conditions require busting the fins loose or racing through big barrels, it’s not a problem for Bethany, who has been turning heads as of late for her poise and fearlessness at heavy wave locales such as Tahiti’s Teahupo’o.

“This year especially, the Women’s Top 17 has a lot of new, young girls who are driven and competitive, and who have so much talent that they are pushing the level of Women’s surfing more and more,” said Hamilton. “It’s really exciting to watch, therefore I’m excited to compete at Bells!”

The Rip Curl Pro Bells Beach presented by FORD will take place at Victoria’s pristine Bells Beach from April 19 – 30, 2011 and be webcast LIVE via www.live.ripcurl.com and broadcast live on Fuel TV in Australia and ESPN in Brazil.