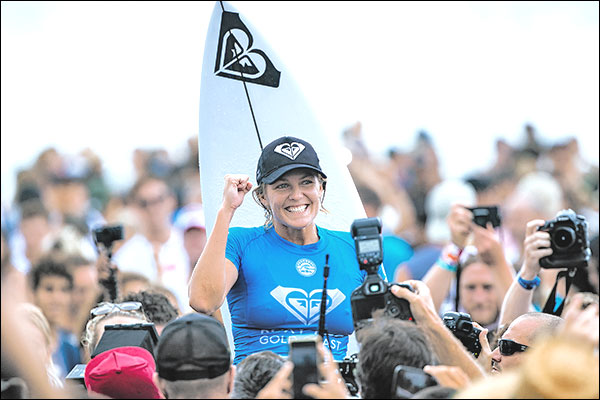 Stephanie Gilmore Back on Top at Roxy Pro

Sunday at Snapper Rocks, Stephanie Gilmore climbed back on top of a Championship Tour podium for the first time since October 2014, claiming the Roxy Pro for the sixth time in her career. Not surprisingly, the win comes at her home break.

Four of the five times she’s won the Roxy Pro, Gilmore has gone on to clinch the World Title. That’s how much this one matters.

This year, however, it matters more.

Sunday marked the end of a two year winless streak for Steph. After getting injured in 2015, she limped back into competition last year, showing a few flashes of brilliance, but none of the killer instinct we’ve come to expect.

Meanwhile, the talent around her was growing. It’s no longer news that the women are progressing at a faster rate than the men these days. What is news, however, is how much more depth there is from top to bottom of the rankings. Easy heats aren’t so easy any more.

Gilmore seemed a bit stunned by that last year. Everyone was inspired by her, but few were intimidated. It probably doesn’t help that she’s a sweet artistic soul. For much of last year she was flexing her creative muscles, too. Steph spends much more time in Los Angeles now than in Coolangatta. She’s enthralled by the creative scene there.

All along, however, that creative side has been the difference between the 6x World Champion and the rest of her competitors. Sure, Steph’s talent level is clearly through the roof, but she simply approaches waves differently. There’s a different connection, style and line she takes that has led her to 10s and victories her entire career. Gilmore doesn’t just shred and hack – she dances, reading waves’ tubes and pockets with a sixth sense. And judging from the surfing that she has been doing lately, she’s clearly looking for that seventh. World Title, that is.