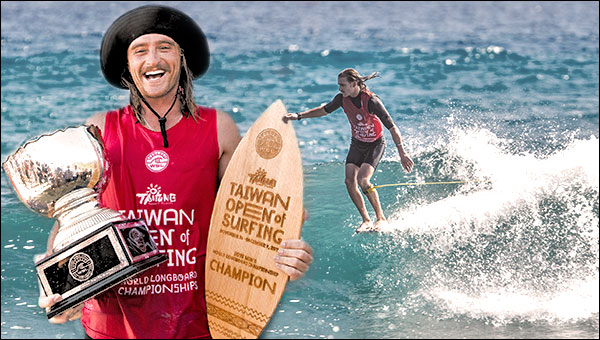 South African Steven Sawyer has just taken out the 2018 WSL World Longboard Championship at the Taiwan Open of Surfing in clean, 2-to-3 foot waves at Jinzun Harbour. Sawyer came up against Longboarding legend Kai Sallas in an incredible 25 minute Final.

24-year-old Steven Sawyer was on fire all event but saved his best performances for the Final Day, posting excellent heat totals in all three heats, including a 9.50 single wave score in the Semifinal, the highest of the entire event. His combination of traditional longboarding manoeuvres with speed, power and flow was impeccable, and he needed it all to overcome Sallas in the Final to best his runner-up finish at the 2016 World Championship. Sawyer had a massive crowd supporting him on the beach who erupted every time he caught a wave, making the atmosphere electric.

“2016 was my first year at the World Championships and I don’t think I was ready or prepared to win — This year I was definitely ready,” Sawyer said. “I still pinch myself when I surf against guys like Kai (Sallas), Taylor (Jensen) and Harley (Ingleby), They are all my heroes so competing against them is surreal. I was watching Kai all week and he was looking to be the guy to beat so when I came up against him in the Final I was really nervous. It was all good though, as I had such an incredible crew cheering me on from the beach that got me really pumped up to perform.”

Sawyer, who is a proven shortboard surfer as well having competed in the 2017 J-Bay Open Championship Tour event as a Wildcard, was competing on a board shaped by his father that seemed to suit the waves of Taiwan perfectly. He will now join the likes of Jordy Smith (Junior), Shaun Thompson, Wendy Botha as a WSL World Champion.

“My dad has been shaping me, incredible boards recently and they worked so well all event. This is my second time to Taiwan and it is such an amazing place with amazing waves, I think it’s the best surf trip I have ever done — Now it’s become even more special for me.”

Kai Sallas was obviously despondent after coming just short of the title once again. In his 15th year of competing at the World Longboard Championships, the maiden title continues to elude him. Regardless of his runner-up finish, Sallas will remain as one of the icons of modern longboarding.

“To make it all the way to the final and then lose never feels good — it really hurts,” Sallas said. “I feel like I was surfing so well all event and then just lost my rhythm in the final. I’ve been competing for a World title for 15 years now and come really close a few times. I think maybe next year I won’t be taking it so seriously as I do because it hits you harder when you don’t win. I’m happy for Steven and his win but I’m definitely hurting.”