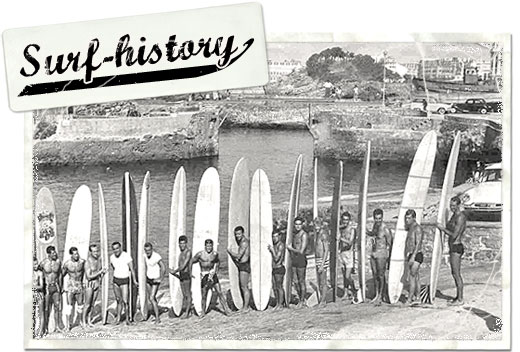 The history of Surfing’s begins in Europe

Just because some dubious German Surfing websites falsely assert that the first European Surfers came from on their territory, we have launched some research in order to correct this. The informations which we have acquired, came from the inestimable assistance some our friends such as Willy Uribe, the French Surfing Federation and the community of Surf4all.net, who supported us during this research and delivered this material to us, which is the source of this article.

We don’t want o wake up certain local nationalism, or pitiful patriotism which only leads to fascism. This is simply an article, which we dedicate to the community of the European Surfers.

Everyone knows Surfing’ Polynesian origins, but how Surfing came to Europe and and who were the first Surfer?

In France, around 1896, some Landais invented a bold water game. When the beautiful season arrived, the youngest résiniers (forest worker, who took the resin from the trees) who worked in the forests close to the Atlantic Ocean, liked to take sea bathings. It happened that large sailing boats that retured from the African coasts, lost a part of their wood charge in the bad weather which passed over edge, and which were rejected by the currents towards the coasts.

Young absolutely bold people understood to ride such trunks pushed in the waves, and that gave them beautiful feelings. Some of them had the idea to split these trunks per half in order to obtain a better buoyancy; and to thin them with a “coumgate” (small instrument like an adze being used to cut wood). Spectators, amused and intrigued, seeing these young people building these boards of wood, designated these swimming devices as “Coungates” and those who rode them as “Coungatataous”.

It was Adrien Durupt, architect and engineer, who has worked with an certain Gustave Eiffel and traversed the world, within the framework of his work, was the first true european Surfer. He travelled a lot, also until to California in 1907, from where he brought back an Surfboard. He went regularly by sailing ship for surfing on the sand banks between Baguenaud and Evens (France), close to Baule. Much later, surfing was imported again in 1956 to the Basque coast by the cameraman, film producer and film director: Peter Viertel

Joël De Rosnay, Michel Barland, Jacques Rott, Jo Moraiz and Bruno Reinhardt contributed to the beginning of the years 1960 with the promotion of this sport in Biarritz on the beach of la côte des Basques.

In England, at Jersey, the Island Surf School was set up in 1923 by Nigel Oxenden, who learnt to surf in South Africa, Australia and Hawaii.
It was arguably Europe’s oldest surf club and although it no longer exists, surfing has kept its base around the Watersplash in St Ouen’s Bay where the club was originally started.

The early Jersey surfers were bodyboarders and some of the very first balsawood boards made in Jersey in the 1930s were created by Mr Oxenden. The boards had painted heraldic designs on them and were complete with rope leashes.

Jersey’s Occupation during the war put an end to any surfing because the Germans mined the beaches. It was not until the arrival of a group of South African lifeguards in the 1950s that helped the sport to make its come back.
It was also around that time that long boards were introduced to the Island.

In Euskadi, Jose Luis Elejoste promoted the ‘planking’ (small fine wood tables with curved end) during the 40’s and 50’s, making it popular. He seated therefore the bases to introduce surf in Bizkaia via Biarritz, just in the beginning of the flower power decade and Vietnam. In 1955 his surfer spirit made  constitute himself as the first peninsular shaper, and perhaps European, by carving a wood surfboard of two and a half meters. Even if he doesn’t have succeeds to surf with, at least not more than with knees, the attempt and persistence deserve our recognition.

At the ‘Actualidades’ cinema of Bilbao (which does not exist any more), Jose Luis Elejoste saw documentary films about the Pacific, where he could see people riding waves upright. He liked that much. Because he had navy friends, some captain, he asked them to bring a surfboard to him when they would sail by the Pacific. In 1944 he read in the Reader Digest that a surfclub existed Hawaii and another one in California. As none of his friends brought a board to him he decided to write to those clubs telling them that he’s attracted from Surfing and that needed information, but none answered to him.

Around the year 1955, in sight that he didn’t obtain Surfboards from nowhere, he manufactured a board of wood, but what he had really made, was a giant planking that weight 22 kilos that reached more than 30 when he came out from the water…

Two years later, around 1957, somebody told him that real Surfboards were been seen in Biarritz. He wrote to the large warehouses from the locality but they didn’t know anything on this subject. Other two years later, when he married, he went for one day to Biarritz with his wife. In the beach of la côte des Basques, he saw two persons riding waves. He approached and made knowledge of one of the Vilallonga guys, which were exiled over there in Barland after the spanish civil war. It spoke with ihm on this subject, and then later in the same year, he went back there. Vilallonga lent him his board, and it was the first time that he has been able to ride upright on a surfboard which really deserved this name; a 3.25 meters board made of wood. And as you can imagine, he liked it. Because he was going to be the only one from Bizkaia, who would practise and those boards cost a rather important sum, six thousand pesetas at that time, that was much. He decided to not buy one until 1964.

Surfing began in Germany at the medium ot the Fifties. Lifeguards from Sylt who started ride upright on large selfmade paddleboards that weighed around 50 kg. In 1964, Uwe Behrens, also lifeguards from Sylt, returns from a trip to France with the first real surfboard.

It took a few years but now Surfing it is really established in Europe. The Surfindustry didn’t only widespread in the majority of the european territory while creating more than 80.000 employment only in the south-west of France (we do not have the numbers for whole Europe), there are also european companies that were created and wich become ever more numerous. But before that, the first European federations were create and some of them belongs now to the best of the world. France, for example, is officially the fifth best world team, also on the ASP tour as on the ISA championships.

More than fifty years are past and Surfing became so normal on our coasts, like the coast itself. Surfing is a sport full with passion and nobody who sees this spectacle for the first time remains indifferent.

But the history is not already completed and as we are receiving more and more testimony, therefore we will tell you more stories about Surfing in our beautiful old Europe. So stay tuned to us!