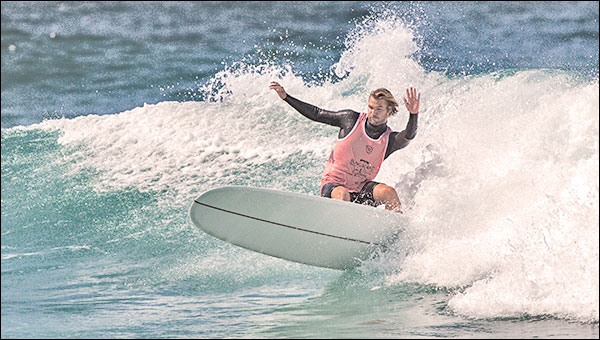 Surfers took on the challenging lineup this morning with solid sets and regular closeouts and demonstrated the extent of their talent as they navigated sections gracefully on the nose of their boards. As conditions gradually improved throughout the day with the incoming tide, scores started to improve and the first few upset results were quick to follow.

Today’s overall standout was none other than the current rankings leader Justin Quintal (USA), who posted the day’s highest combined heat total of 13.17. The Floridian always looked perfectly in control of his 9Ft+ longboard, running to the nose and back effortlessly and mixing it up with drop-knee cutbacks.

“I was watching the conditions earlier and guys were surfing really well but it was definitely really tricky,” Quintal said. “Our heat I think got lucky as the waves were finding the bank a little bit better with the higher tide. I was stoked to connect one all the way through and that was my plan going in to look for those. Leading the rankings after only one event does feel good but there’s obviously more work to do before finishing the year in the top slots and especially with Taiwan being weighted the way it is so a lot is going to come down to that event.”

Current No. 3 from Noosa, Australia, Harrison Roach locked in the highest single-wave score of 7.33 on a long right exactly when he needed it to make his way out a tricky Round 2 bout. The Australian struggled for most of the heat to simply find the right waves to surf and was needing a big score in the context of the heat to make the top two qualifying spots. He started on a set and surfed it brilliantly all the way in to post the winning score and grab the win.

“I wasn’t doing too well until that right came through and it was hard work out there,” Roach said. “I’m just excited that the tour has really nice venues and it’s not just the one event this year. The first one was in my hometown of Noosa and I did pretty well so here I am. This is kind of new for me and I’m just happy I didn’t fall too much.”

“I’m stoked to be here in Spain with such great weather and surfing against all these legends,” Roseyro said. “I’m just going to try and continue to enjoy myself out there, not put anymore pressure on myself and just do my best in every heat.”

Hawaii’s Kaniela Stewart styled his way through a first heat in Galicia to take an easy win into Round 3. The tall regular foot logged multiple nose rides and beautiful carves for a 6.50, the third highest single score of the day in Pantin. With a Quarterfinal finish in Noosa at the beginning of the year, Stewart is looking to solidify his position on the rankings’ Top 10.

“Everybody here is really good and you never know what can happen so I’m a little bit nervous,” Stewart said. “The wide point is further back on my board and the nose it a little pulled-in, this is one of my favorite boards you can just hang ten for ever and when you get on the tail you can turn it.”

The field was reduced from 56 to only 24 on this opening day of competition in Galicia and surfers will be back at 9 a.m Thursday for a potential early start to either the men or women’s divisions.