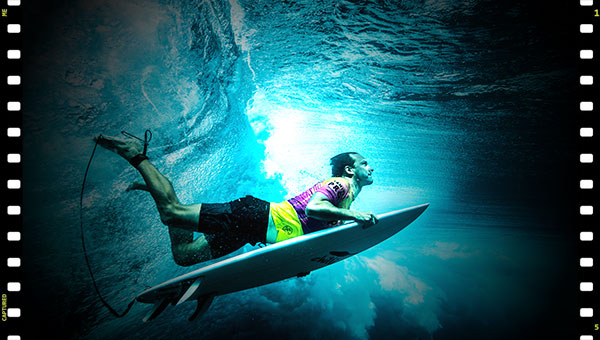 Teahups’o, Tahiti (Friday, August 16, 2019) – Today, the World Surf League (WSL) revealed its collaboration with ‘Glowing Glowing Gone’, a global campaign advocating for greater funding and action for coral reef conservation by highlighting the global danger signaled by fluorescing corals. With the WSL’s commitment to leave every place better than we found it, this campaign is focused on raising awareness around the crisis facing coral reefs, while taking action in French Polynesia to support local projects to restore these habitats.
The collaboration features a complete takeover of the Tahiti Pro Teahupo’o presented by Hurley event branding to incorporate the exact colors of fluorescing corals. The customized range of “Glowing” coral colors were specifically created by the campaign partners Adobe and Pantone from imagery taken by The Ocean Agency in New Caledonia. The three colors, Glowing Yellow, Glowing Blue, and Glowing Purple, will be incorporated into all event branding, including the competition jerseys, which will deviate from standardized colors for the first time ever. The Glowing campaign is a joint initiative between The Ocean Agency and UN Environment and includes some of the world’s largest conservation organizations. The campaign is supported by Tahiti Pro partners Hurley, Jeep, Corona, and Red Bull.

In 2016, a team from The Ocean Agency photographed one of the most spectacular and rarest sights in nature while filming the Netflix Original Documentary Chasing Coral. A coral reef situated in New Caledonia was “glowing” in incredibly rare vivid colors due to an underwater heatwave. The corals were producing brightly colored chemicals that act as sunscreen in a desperate bid to survive the fatally high water temperatures. This glowing coral phenomenon, called fluorescing, is one of the most visual indicators of the climate crisis and the existential threat to entire ecosystems such as coral reefs. However, until now, it has gone largely unnoticed.

The WSL and WSL PURE are committed to action to address the climate crisis, and its effects on coastal habitat like the coral reefs of French Polynesia. These reefs are under pressure from many human-related causes, most notably ocean warming and acidification related to climate change. In addition to offsetting the carbon footprint of the entire event in Tahiti, including air travel, the WSL is supporting Coral Gardeners, a youth-led non-profit organization that is actively restoring coral reefs in the area.

“We’re excited to both raise awareness for the plight of coral reefs around the world as well as support real impact in French Polynesia,” said Sophie Goldschmidt, CEO of the WSL. “The Glowing Glowing Gone campaign draws attention to the cause and global solutions, while the Coral Gardeners are making a positive difference in the restoration of the nearby reefs, and the WSL is proud to partner with both organizations.”

“The future of the world’s coral reefs hangs in the balance, threatening both marine life and hundreds of millions of people who rely on them for food, livelihoods and coastal protection,” says Gabriel Grimsditch, UN Environment coral reef expert. “By supporting the Glowing campaign, the World Surf League is leading the way in helping to sharpen global attention to the crisis facing corals.”

“We are thrilled about the World Surf League’s commitment to making their events carbon neutral and free of single-use plastics, and their support of the Glowing campaign,” said Richard Vevers, Founder and CEO of the Ocean Agency. “The WSL has the reach and influence to raise awareness and funds for coral reef restoration, making a tangible positive impact through their events, athletes, and content. The WSL’s support of the Glowing campaign will certainly help us achieve the mission to be the first generation to save an entire ecosystem.”

To learn about how you can take action to support Glowing Glowing Gone and ocean health initiatives, please visit WSLPURE.org.
The Tahiti Pro Teahupo’o presented by Hurley opens Wednesday, August 21 and runs through Sunday, September 1, 2019.