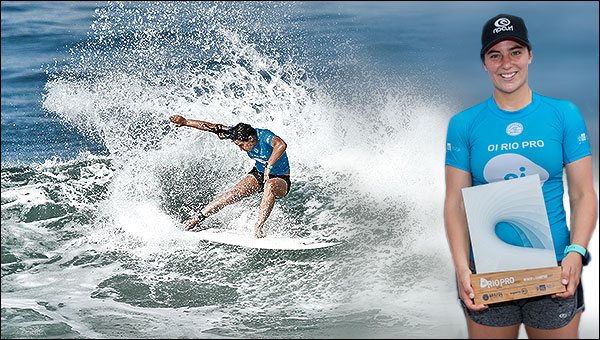 Wright’s victory today is her first of the 2017 season and third in Rio de Janeiro (2013, 2016, 2017), which earns her a place in the record books alongside Australian legend Pauline Menczer for tied wins at this event. In addition, the feat boosts Wright to the top of the Jeep Leaderboard. The Reigning WSL Champion will now share the coveted Jeep Leader Jersey with six-time WSL Champion Stephanie Gilmore (AUS) heading into the OK Fiji Pro.

“It is sick to be sharing the Jeep Leader Jersey with Steph [Gilmore],” said Wright. “It is going to be a good year. It has always been a part of my plan after the Australian leg to be in this position. I am feeling really good. It is cool to be working on stuff over the last year and put it into action. Thanks to everybody. I also want to wish my mom a Happy Mother’s Day!”

Wright surfed through every heat of the Oi Rio Women’s Pro to defend her event title against a tough field of competitors, including 2017 World Title contender Sally Fitzgibbons (AUS) in the Semifinals and Defay in the Final.

“This has been a good week,” continued Wright. “The crew is absolutely amazing here at the moment. I have my brother Owen [Wright], Matt [Wilkinson], Laura [Enever], Fletchy [Ryan Fletcher] and Mick [Fanning]. I’ve put in a massive block of work before I came over, making sure that my backhand was where it needed to be. It is cool to be able to focus on performance and what I’ve actually got to do. I am psyched on that.”

The Final witnessed the tenth head-to-head matchup between Wright and Defay. The Australian came charging out the gates with a 7.50 (out of a possible 10) on her opening exchange and quickly locked in a near-perfect 9.67 to put the pressure on the Frenchwoman. Defay fought back with a 7.43 to escape the combination, but was not able to find the 9.74 required to win.

“I just want to thank the crowd here at Saquarema,” said Defay. “The waves have been so much fun and I think everyone enjoyed being here. It was so good and I am happy with my performance. Thank you to everyone for all of your support. I am excited for Fiji.”

Defay’s runner-up finish marks her best result of the 2017 season and vaults her from seventh to fourth on the Jeep Leaderboard. Defay will head into Stop No. 5 on the Championship Tour, the OK Fiji Pro, eager to defend her event title after her stunning win last season.

En route to her win, Wright knocked out Fitzgibbons in the second Semifinal. In a rematch of this year’s Drug Aware Margaret River Pro Final, Wright got the upper-hand this time with a 17.87 combined score to Fitzgibbons’ 13.77 heat total. This is the second 3rd place result for Fitzgibbons this year, in addition to her 1st at Margaret River and 5th at Bells Beach. Fitzgibbons will now move to third on the Jeep Leaderboard.

Nikki Van Dijk (AUS) was eliminated by eventual runner-up Defay in the first Semifinal. Van Dijk, who has been in form all event, continued to showcased her quick, vertical surfing to post a 7.50 and 5.87. Defay locked in an excellent 8.00 but still needed a backup score to stay competitive. The final minute of the heat saw an exchange between Defay and Van Dijk for the win. Defay got the edge with a 6.33 to halt the Australian’s run for her career-best result. Van Dijk will now go from eighth to sixth on the rankings heading into the OK Fiji Pro.