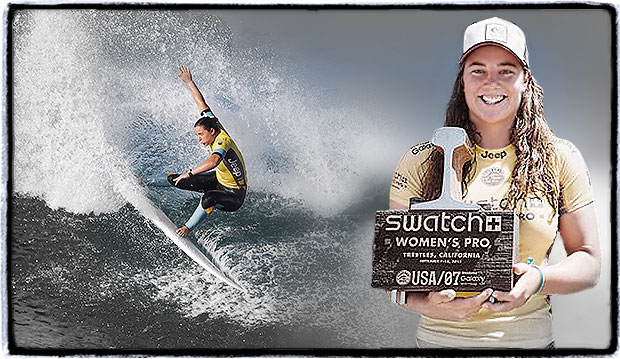 Tyler Wright (AUS) claimed her fourth Championship Tour victory of the season in an all-Australian Final against six-time WSL Champion Stephanie Gilmore (AUS). The win sees Wright retain the Jeep Leader Jersey, increase her lead on the rankings and move her even closer to claiming her first World Title. The result puts her more than 7,000 points ahead of her closest rival Courtney Conlogue (USA) heading into the next event on the CT, the Cascais Women’s Pro. Wright dispatched Laura Enever (AUS) in the Quarterfinals, Sage Erickson (USA) in the Semifinals before facing Gilmore and taking her 9th career CT win.

“It’s been quite a journey from this point last year and a lot has changed this season,”said Wright. “It’s all come together and I’m absolutely loving it. I knew I had to get on the better waves facing Steph [Gilmore] in the Final. Surfing against her as someone I look up to is great, she’s still one of my surfing idols and inspires me to go after things my way.”

The two finalists have shared nineteen head-to-head CT match-ups, with Wright taking her 8th win over Gilmore. Wright opened her account with an excellent 8.50 and 6.37 to put the heat on the six-time WSL Champion. Gilmore charged with a progressive grab-rail attempt to combat Wright, but was not scored high enough to escape the combination situation. With time winding down, Gilmore locked in a 6.00, but still needed an excellent 8.87. With two minutes left in the Final, a set provided Wright and Gilmore one last opportunity. Wright was able to improve her 6.37 with an excellent 8.63 and take the win over Gilmore, despite her near-perfect 9.13.

“I set out with a goal this year and that’s to win every heat and win every final and I’ll go into the next events with that same goal and that same attitude,” Wright continued. “I’ve put a lot of work in and have probably the best team in the world right now. I’m really looking forward to the next event but I’m going to stick with my game plan.”

“It’s the World Title and I think I just decided that I wanted to go for it,” Wright said. “As soon as I decided that, I’ve done everything I know how and I went out and learned what I didn’t know. I’ve been in World Title races before but it feels so much different, I feel so much more comfortable and confident. It’s just flowing for me and I just feel good. I’ve got so much love behind me.”

The next event on the 2016 Samsung Galaxy WSL Championship Tour will be the Cascais Women’s Pro, which will see the world’s best female surfers head to Portugal from September 24th to October 2nd.