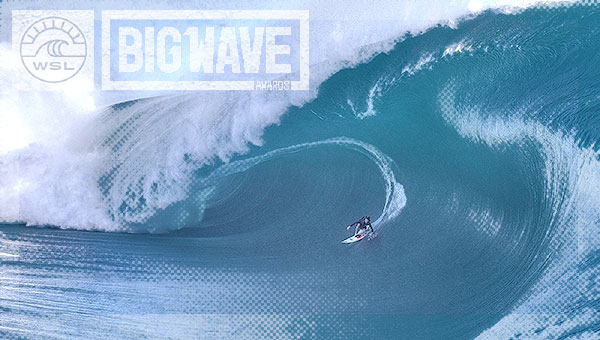 Los Angeles, CA/USA (Wednesday, March 23, 2016) – The 2016 World Surf League (WSL) Big Wave Award nominees have been announced following an historic El Niño winter, which delivered colossal waves and challenged surfers from around the world to push the limits of big wave surfing. The rides in this year’s nominations span across world renowned breaks, from heavy barrels at Teahupoo, Tahiti to monstrous waves at Jaws, Maui. The 2016 nominees demonstrated outstanding performances across a diverse assortment of award categories.

Shortlisted surfers include 2015/16 Big Wave Tour Champion, Greg Long, as well as past Big Wave Award recipients Shane Dorian, Mark Healey, and Keala Kennelly. Kennelly, who received the Overall Women’s Performance Award in 2014, is the first female to be nominated for an open gender category. The nominations also include up-and-comers Nathan Florence and Albee Layer.

“There was a lot of hype around El Niño this year, and as far as the big wave community is concerned, it delivered and then some,” said Bill Sharp, Event Director of the Big Wave Awards. “Not only were there extraordinary episodes of historically large surf, this time around the best surfers were able to handle it as it came and the results speak for themselves. I think anyone who’s been watching thinks there is a big chance records will be set when the results are in.”

“This is a historic day for women’s surfing as it’s the first time a female has been nominated for a unisex Big Wave Award category with Keala Kennelly’s historic tube at Teahupoo,” continued Sharp. “This has nothing to do with affirmative action or special divisions, she is nominated for the 2016 Pure Scot Barrel of the Year Award because she simply pulled into one of the heaviest waves ever seen. Just look at the photos and no further explanation is required.”

The WSL Big Wave Awards competition window ran from March 21, 2015 through March 15, 2016. Every wave ridden at every big wave break around the world in this period was eligible for consideration across seven categories. A panel of judges chose the five best rides in each of the categories based on photographic and video evidence.

The winners will be crowned at a gala awards show at the Grove Theater in Anaheim, California on April 23.

This year’s event features over $250,000 in total prize money to be allotted across the categories along with TAG Heuer watches for winners. In addition to the four categories announced today, the popular TAG Heuer Wipeout of the Year, Women’s Performance and Surfline Overall Performance Awards finalists are yet to be revealed and will be announced on Tuesday, March 29, 2016. Photographs and video of all the nominated rides can be viewed at WorldSurfLeague.com/BigWave.

The Billabong Ride of the Year is awarded to the surfer who demonstrates the most advanced and committed level of big wave surfing during a successful ride, as judged by available video-footage. While raw size is taken into consideration, it is ultimately the level of performance that is rewarded. The category carries the biggest prize of the Big Wave Awards with $60,000 for the winner, $15,000 for second place, $10,00 for third, $5,000 for fourth and $3,000 for fifth place. The first place videographer will receive $6,000, and second through fifth place videographers will receive $750. The Hawaiian surfers dominated the Billabong Ride of the Year nominations for this category, with all five finalists hailing from the Aloha State. Three of the five nominated rides took place during an epic winter at Jaws, Maui including entries from 2013 Ride of the Year winner Shane Dorian (who has a second nomination in the category from Jaws) and Albee Layer, who took second place at the 2015 Big Wave Tour Pe’ahi Challenge. Tyler Larronde secured a nomination from his massive ride at Maverick’s, California. The remaining nominee, Nathan Florence, earned his selection on a heavy ride at Teahupoo, Tahiti.

The Paddle Award goes to the surfer who paddles into and successfully rides the biggest wave of the year. The winning surfer will receive $25,000 and the $5,000 will go to the photographer who captured the ride. This year’s nominees showcased an incredible display of big wave surfing with rides at Maverick’s, California from local Ben Andrews and Nicaraguan Manny Resano. Brazilian Pedro Calado and Hawaiian Aaron Gold earned their nominations with giant rides at Jaws. Hawaiian Mark Healey, Big Wave Tour veteran, secured his nomination on a towering left at Puerto Escondido, Mexico.

The TAG Heuer XXL Biggest Wave Award goes to the surfer who, by any means available, catches and rides the biggest wave of the year. The winner will receive a $20,000 prize, along with a $4,000 TAG Heuer Watch. The photographer of the ride will receive a $5,000 prize. Finalists include rides from Pedro Scooby, Garrett McNamara and Mick Corbett at Nazaré, Portugal across the entry window. Two of the five nominated rides took place on February 25, 2016 at Jaws, Maui including entries from Niccolo Porcella and Yuri Soledade.