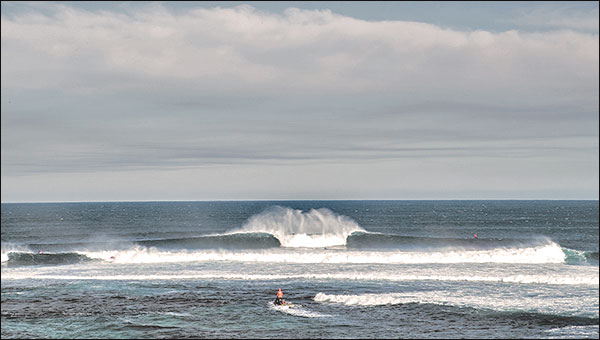 Margaret River, Western Australia/AUS (Wednesday, April 18, 2018) – Early this morning, WSL CEO Sophie Goldschmidt sent a letter to surfers informing them of the cancellation of the remainder of the 2018 Margaret River Pro, Event No. 3 on the 2018 WSL Championship Tour, as a result of exceptional and unique circumstances surrounding this season’s event with regards to sharks and the safety of our surfers.

“The WSL puts the highest premium on safety,” Goldschmidt wrote. “This cannot be just talk, and it cannot be compromised. Surfing is a sport that carries various forms of risk, and is unique in that wild animals inhabit our performance environment. Sharks are an occasional reality of WSL competitions, and of surfing in general. Everyone associated with our sport knows that. There have been incidents in the past – and it’s possible that there will be incidents in the future – which did not (and will not) result in the cancellation of an event. However, current circumstances are very unusual and troubling, and we have decided that the elevated risk during this season’s Margaret River Pro has crossed the threshold for what is acceptable.”

Following two separate incidents that occurred at nearby Gracetown on Monday, April 16, approximately 6 kms away from primary competition site at Main Break, the WSL actioned safety protocols and met with a variety of stakeholders for feedback over the past 48 hours before making the decision to cancel the event.

“Safety is our top priority and this is the right call given the circumstances,” Kieren Perrow, WSL Commissioner, said. “We’ve closely assessed the situation, spoke with the athletes, Water Safety, local authorities and reviewed as much information as possible. Margaret River is a fantastic part of the world, but the presence of actively aggressive sharks and beached whales this season have convinced us that this is the correct course of action.”

“It’s a really difficult decision as the surfers love coming here,” Sage Erickson, WSL CT Surfer and Women’s Representative, said. “It’s beautiful, the waves are amazing and the community is very supportive of professional surfing. That said, the situation this season is really challenging and a number of surfers don’t feel safe. I know it isn’t an easy decision, but we really appreciate the amount of information and discussion that went into it.”

“Sharks are something we will continually deal with every time we surf and we accept that risk,” Adrian Buchan, WSL CT Surfer and Men’s Representative, said. “Given the extenuating circumstances of dead whale carcasses, multiple attacks and increased sightings, I’m fully supportive of the WSL’s stance to put Surfers safety before all else. South West WA is one of my favourite places to visit and part of its allure is the raw beauty and feeling of being close to nature. I’m really feeling for the local community and look forward to to being back soon.”

The cancellation of the Margaret River Pro will see points distributed per the WSL rulebook, but organizers have not ruled out potentially completing the events elsewhere during the season.