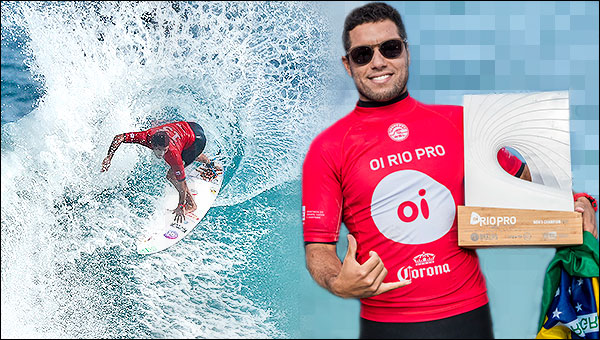 “It has been a while since I have stepped onto the podium,” De Souza said. “But, I have been working for so long to be here. I am so grateful for all the support, especially all the fans here in Brazil. You can count on me because I am back in the game.”

De Souza looked in fantastic form throughout this event with wins in every heat leading up to the Final. The Brazilian has been one to watch throughout the Australian leg and today’s win in Saquarema strengthens his World Title campaign with his best result of the 2017 season.

he final witnessed Buchan and De Souza battle in a game of tactics and precision for the win. De Souza got to an early lead with two 7-point rides, forcing Buchan to seek out a 9.50 (out of a possible 10). The Australian answered with a near-perfect 9.20, but still needed a second score to combat the Brazilian with ten minutes left on the clock. Under Buchan’s priority, De Souza improved his situation with a critical 9.80 to increase his lead. Buchan hunted the lineup and made a final attempt, but the score fell just short of the 8.44 that was required, leaving the Brazilian with priority and the win.

Buchan now climbs to 12th on the Jeep Leaderboard after sitting in the 24th position going into this event. The runner-up result marks the Australian’s best finish of the 2017 season and first Finals appearance since 2013, when he won in Tahiti. Buchan has had a slow start to the year with one 25th place finish and two 13th places finishes, but his new ranking proves that he is back in the mix this season.

“I’ve really enjoyed myself here in Saquarema,” said Buchan. “I think the surfing we’ve seen in the last ten days has been incredible and has shown the world that Brazil has great waves and incredible surfers. Brazilians do beach culture better than everyone else. I am looking forward to coming back next year. It was really special to have a Final with Adriano [de Souza]. He is an amazing role model for all the young Brazilian surfers and I just want to say a huge congratulations to him. ”

Event wildcard Yago Dora (BRA) wreaked havoc at this event with major wins over three WSL Champions, Mick Fanning (AUS), Gabriel Medina (BRA) and Florence, but met his match in the first Semifinal against eventual winner De Souza. The all-Brazilian match-up saw an intense clash between the veteran and the newcomer as both surfers battled for control. De Souza locked in a near-perfect 9.57 and an 8.40 to set the pace and put Dora in a difficult situation, unable to battle back. In his career-first CT event, Dora will leave determined to qualify for the elite tour in 2018 after his amazing 3rd place finish.

“I want to get on tour next year,” Dora said. “I am learning a lot at this event and it is helping my confidence. I feel like I am more ready with every heat. Both Gabriel Medina and Mick Fanning are my idols and to beat them is amazing.”

Matt Wilkinson (AUS) had a great run at the Oi Rio Pro, but will exit with a 3rd place result after losing to Buchan in the second Semifinal. Wilkinson previously dispatched Owen Wright (AUS) in the Quarterfinals and Kanoa Igarashi (USA) in Round 5 en route to his second Semifinal of 2017. Wilkinson will now move up from 9th to 5th on the Jeep Rankings.

De Souza previously took down 2012 WSL Champion Joel Parkinson (AUS) in the Quarterfinals. Parkinson’s Equal 5th place result will move him up to 6th on the Jeep Leaderboard.

Smith will remain at No. 2 on the Jeep Leaderboard despite failing to make it out of his Quarterfinal matchup against Buchan and closes the gap on Florence with just 350 points between them. Smith has been in great form all season, especially with his recent win at the Rip Curl Pro Bells Beach, but will need to post another top result in order to claim the coveted Jeep Leader Jersey.

Australians Wright and Fanning were eliminated in the Quarterfinals by Wilkinson and Dora, respectively. Wright will remain in Equal 2nd on the rankings and will look to reclaim the Jeep Leader Jersey in Fiji, where he earned the historic Perfect 20 and win in 2015. Three-time WSL Champion Fanning moves up from 19th to 12th with his second Quarterfinal berth of the season.

The next stop on the 2017 WSL CT will be the Outerknown Fiji Women’s Pro May 28 – June 2, 2017, followed by the Outerknown Men’s Fiji Pro from June 4 – 16, 2017. The events will be broadcast LIVE via WorldSurfLeague.com, the WSL app and on Facebook LIVE via the WSL’s Facebook page. Also check the local listings for coverage on CBS Sports Network in the U.S., Fox Sports in Australia, ESPN in Brazil, Sky NZ in New Zealand, SFR Sports in France and Portugal and as part of the EDGEsport Network.