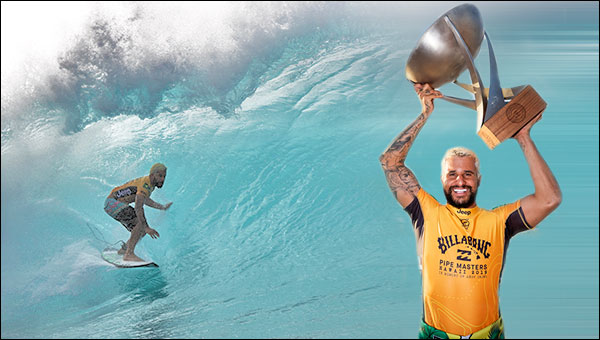 Banzai Pipeline, Oahu/Hawaii (Thursday, December 19, 2019) – Italo Ferreira Claims 2019 Surfing World Title after defeating his closest rival, Gabriel Medina (BRA), in a heated Final in six-to-eight foot (1.8 – 2.4 meter) waves at the 2019 Billabong Pipe Masters, the final stop on the Men’s WSL Championship Tour (CT) and third gem of the Vans Triple Crown of Surfing. Ferreira is only the third Brasilian to win the World Title and Billabong Pipe Masters trophy and celebrated the double-win with an emotional chair up the beach to the awards stage.

“I can’t believe it, it’s unreal,” said Ferreira. “I’ve dedicated my whole life to get one trophy and I did. This is going to my grandmother and my uncle first. I came to Pipe a month ago to train and test my boards. This trophy means a lot to me and I just don’t have the words. Those were good heats against Kelly (Slater), Gabriel (Medina), Yago (Dora) and all the boys. You guys all give me a lot of energy and I just try to do my best every single day.”

On Ferreira’s path to victory, he overcame Medina, two-time World Champion and formidable competitor, in the Final, and Kelly Slater (USA), 11-time World Champion and seven-time Billabong Pipe Master in the Semifinals. Ferreira’s wave selection reigned supreme under pressure, in part thanks to Pipeline specialist Shane Dorian (HAW), who helped coach and guide the Brasilian, but largely due to his perseverance. He committed to being on the North Shore for a month ahead of this event and had one goal in mind, which was only achievable by conquering Medina.

“This year was so crazy with ups and downs so this means a lot,” continued Ferreira. “Before I started this competition, I was looking at this trophy and thinking I really want that. But now it’s in my hands and the celebration can start. This year was really different for me and special and I want to thank God for everything!”

Ferreira opened the final heat of the season in the first fifteen seconds with inside position and earned the best single-wave score of the Final, a 7.83 (out of a possible 10), for a rare Backdoor barrel on his backhand. He never gave up the lead and put pressure on Medina from start to finish and ultimately ended with a 15.56 scoreline to Medina’s 12.94. Conditions progressed throughout the day to deliver proper Pipeline barrels that pushed twelve-foot faces for the Brasilian showdown.

Medina had a brilliant performance against John John Florence (HAW) in Quarterfinal 3 and scored a near-perfect 9.23 for a cavernous Pipeline left, along with an 8.40 to combo Florence. Medina’s dominance seemed unbeatable, especially with his expertise in big frontside barrels.

“I just want to thank everyone for cheering for us,” said Medina. “It’s been a fun week and that wave was a really fun one, maybe it was the heat we got a lot of waves. Against John, it’s even more special because he’s one of the best surfers in the world and I love to compete against him. I just feel really good surfing these waves. I just want to thank all the locals for letting us surf this wave because it’s one of my favorites that I surf. I’m proud of myself and now looking forward to the next one.”

En route to his second-place finish, Medina also eliminated Caio Ibelli (BRA) in dramatic fashion with an interference to top off his win in Heat 5, R/16. This heat was a rematch of the MEO Rip Curl Pro Portugal Quarterfinals where Medina earned an interference penalty against Ibelli. Ibelli exits with a 9th place result, matching his personal best at the Billabong Pipe Masters.

“Just playing the game,” said Medina. “It was my priority, I knew if I had an interference that I was going to count my big wave. There was like 20 seconds left so it’s all good. I wasn’t sure [if Caio would have gotten the score], that’s why I went. He needed a 5, but it was really hard out there. I just had to play the game. Sometimes if it’s in the rules, you gotta play the game.”

After 21 years, Kelly Slater (USA) made a historic comeback to win his third Vans Triple Crown of Surfing title by besting an international trio that included former Billabong Pipe Master Michel Bourez (FRA), Jack Freestone (AUS) and Ethan Ewing (AUS) heading into Finals day. It was a hard-fought race as this Vans Triple Crown saw one of the best seasons for surf in recent history, including all-time conditions at Haleiwa for event No. 1, the Hawaiian Pro, and massive, challenging surf at event No. 2, the Vans World Cup of Surfing at Sunset Beach.

“I’ve been planning this attack for 21 years [laughing],” said Slater. “The first two (Vans Triple Crown titles) that I won I really wasn’t even thinking about them because I was so focused on trying to win a World Title and focused on Pipeline at the time. I’m just stoked, I had a really fun finish to the year for me. I just want to say thanks to everyone, it’s been a super fun year and damn I wanted that thing today. If I got here this year and only caught that wave (the perfect 10-point ride during R/32 Heat 8) it would have been a success, so I’m stoked.”

The Vans Triple Crown is in its 37th year of crowning the best surfer of the North Shore competitive season and is the world’s longest-running annual heritage surf series. Culture-defining, the Vans Triple Crown is a highly-coveted title and legendary surfers the likes of Sunny Garcia (HAW), Michael and Derek Ho (HAW), Andy Irons (HAW) and Joel Parkinson (AUS) have had benchmark career moments from their victories here in Hawaii. Vans, partner and community centerpiece, has continued to advocate for world-class competition in parallel with North Shore activations and a robust sustainability program to help build a community-first mindset. While the Vans Triple Crown officially culminates with the finish of the Billabong Pipe Masters, it begins at the Vans Pro Men’s QS 3,000 with local qualification spots, a true testament to Vans’ commitment to the North Shore.

Only ten non-Hawaii athletes have claimed the Vans Triple Crown title in the past 37 years, two coming from the USA (Slater and Griffin Colapinto). The 11-time World Champion leaves today with a beloved trophy carved out of a broken surfboard by sustainable artist Ruben Aira.

John John Florence (USA) and Julian Wilson (AUS) have provisionally qualified through the WSL CT to represent the USA and Australia, respectively, at the Olympic Games Tokyo 2020.

“It feels super good and that was the goal I set for this event and coming back for the Pipe Masters,” said Florence. “I’m fired up to accomplish that goal! I wanted to surf the least amount of heats possible for my knee and my recovery so I’m stoked. I am so happy to go to the Olympics and represent the USA and I couldn’t have done it without all the support here in Hawaii. A month ago I couldn’t even stand on my board so to be here today and surfing in the Quarters against Gabriel is more than I can ask for.”

“This is an incredible opportunity and it’s very surreal,” said Wilson. “I had a month off after Portugal and I trained my butt off to earn this spot on the Australian team. It’s a chicken-skin moment to know that I’m going to go to the Olympics and represent my country and I’m proud of myself.”

Surfing will make its Olympic debut in Tokyo in 2020 and the 2019 WSL CT was a crucial qualification pathway for the world’s best surfers. Following the season finale in Hawaii, the WSL rankings have determined the first 10 eligible men to qualify for the Tokyo 2020 Olympic Games, subject to all qualified surfers meeting the ISA’s and IOC’s eligibility requirements and being selected by their respective National Olympic Committees.

The ten provisional qualifiers are:

For highlights from the Billabong Pipe Masters in Memory of Andy Irons and the 2019 Championship Tour, please visit WorldSurfLeague.com.

Billabong Pipe Masters Round of 16 Results: