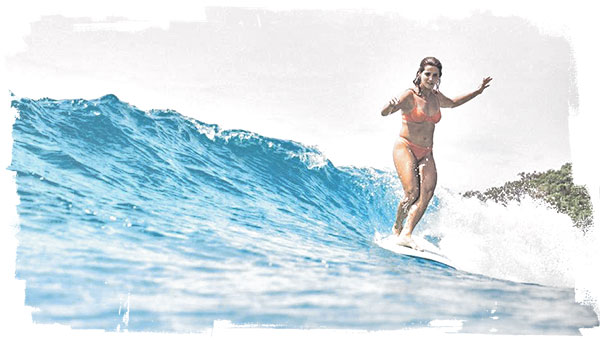 Justin Quintal and Chloe Calmon have taken out the opening event of the 2019 WSL Longboard Tour, the Noosa Longboard Open. After 4 massive days of action surfed at 3 different locations around Noosa, Queensland, the pair took victory in clean 2-to-3 foot peaks at Castaways Beach.

The pair are now number one ranked surfers in the world on the revamped WSL Longboard Tour which comprises of four events – Noosa, Queensland, Pantin Spain, New York City and Taitung Taiwan. These event will decide the eventual 2019 WSL World Longboard Champions.

Chloe Calmon has finished just short of a world title a number of times in her young career but hopes that in 2019, she can go all the way. The 25-year-old Brazilian longboard prodigy has all the makings of a Champion but not yet the silverware to match it. Today Calmon got her 2019 campaign off to the perfect start with a dominating performance over Honolua Blomfield (HAW) in the Final. Calmon believes that the revamped WSL Longboard Tour with it’s new locations and format could put her in a better position than she’s ever been to take WSL Longboard glory.

“I’m so stoked to win this event but I’m more stoked about the direction Longboarding is going in,” Calmon said. “With the new events and the new format longboarding is in such a good position. There is more opportunity to win the title, and even more opportunity for more surfers to compete which is so cool. It’s such an exciting time to be involved. This is such a shock to me I really wasn’t expecting this to unfold like this. Obviously, my aim was to win this event, but I thought if it was going to happen it was going to be at First Point. I have been practicing over there on the point and getting my backside dialled in so to win on left-handers at a beach-break is not what I had in mind — but I’ll take it for sure.”

In his first WSL event in almost five year’s Floridian Justin Quintal surfed through eight rounds at three locations including First Point, Main Beach and Castaways. Quintal posted excellent sores all the way to eventually set up a Final with reigning WSL World Longboard Champion Steven Sawyer. After a boundary pushing performance in his Semifinal it seemed as if Quinatal had peaked too early leaving Sawyer to lead the Final for it’s majority. Fortunately for Quintal, he found a long walling left and rode it perfection, combining drop knee cut-backs with some long hang-tens through the critical sections to take the lead and clinch victory.

“This feels amazing and definitely a little unexpected,” Quintal said. “It was a super long trip to get here and a bit of a last minute decision which I’m pretty glad to have made. It’s been a really crazy week with the swell dropping and the event moving around alot. The way the event crew have dealt with it is super impressive and we’ve always been in the best waves possible each day. The direction the WSL is taking with the Longboarding Tour is a really great one. I think we will see a lot more great longboarders competing at all of these great locations which is going to put longboarding in such a good place. I’m really excited to compete in Spain and New York and hopefully go all the way to Taiwan at the end of the year.”

2017 WSL World Longboard Champion Honolua Blomfield has been a staple at Longboard Tour events since she was in her mid teens and has achieved so much in such a short time. The Hawaiian native seems as if she was born to ride a surfboard, short or long, and although she came up just short at Noosa, Queensland, Blomfield is sure to be upon the podium for years to come.

“I feel like i fell apart a bit in the final so i’m a little bummed,” Blomfield said. “I glad I made the final and am set up for the next few events but really would have like to win. I’m just glad I’ll have three more events to prove myself which is thanks to the WSL and the revamped Longboard Tour.”

Reigning WSL World Longboard Champion Steven Sawyer‘s relaxed demeanor makes him one of the Longboard Tours most liked characters, but don’t be fooled as once he pulls on the contest jersey, he is as competitive as anyone. With this in mind, the loveable South African is over the moon that in 2019 he will have four events to mount his campaign on back-to-back world titles.

“I love competing so much it’s in my blood,” Sawyer said. “Having more events for the Longboard Tour and the revamped format is so good. I’m so stoked to have shared a heat with Justin (Quintal) and the fact that it was a final made it even more special. First or second is a great result as I had a bit of pressure to back up my win in Taiwan so I’m really happy. It’s been an amazing week hanging out in Noosa, Queensland — I love this place.”

On his way to the Final, Quintal overcame local favourite Harrison Roach in what was by far the heat of the event. The pair, who are not known for surfing in WSL event’s, but for their flare and style on single fin logs, traded excellent scores, each using a combination of smooth carving turns, time on the nose and stylish footwork. Roach finished the heat with a 9.07 (out of a possible 10) in his 17.77 heat total while Quintal only just pipped him with a 17.93 heat total. All of the scores in this heat both single wave and heat totals were the highest of the entire event and was an incredible display of the world’s best longboarding.

“That was such an intense battle with Justin,” Roach said. “He left me needing such a solid score and I thought there was no way I would get. Justin actually told me if there was anyone here that could it would be me’ which was really nice of him. I actually got two decent scores and took the lead but in little lefts like this Justin was always going to be so hard to beat. I’m stoked he has gone on to the final and won it. I think the scores the two of us were being rewarded with is a great indicator on the direction the WSL is taking with the Longboard Tour which is really exciting. I’m not entirely sure yet but as I’m sitting at equal third I might have to start considering travelling to Spain, New York and even Taiwan to keep competing, we’ll wait and see.”

The WSL Longboard Tour Competitors will now set their sights on the Galicia Longboard Pro which will run in Pantin, Spain from August 28 – 31.