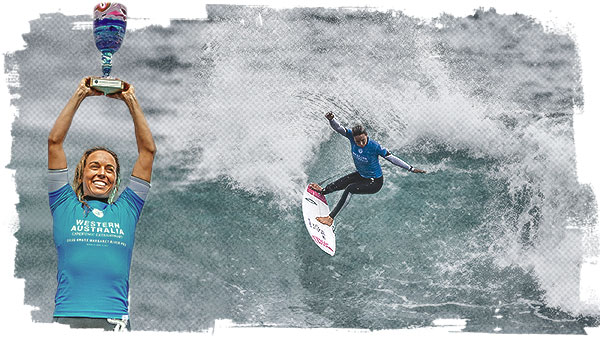 “I’m so over the moon to be holding this trophy,” Fitzgibbons said. “When I heard my name being called out as the champion, I really felt a sense of belonging and calm. It’s been an amazing couple of weeks here in the West and to finish it off with a win is the best feeling. I love coming to Margaret River. I feel like it’s a place that I am super comfortable and familiar with, so it’s a special event win for me.”

The Final saw the heated all-Australian battle unfold between Fitzgibbons and Wright at Main Break. Fitzgibbons kicked off the Final with an authoritative 7.83 on her opening ride. Wright fired back on multiple attempts, but was only able to lock in mid-range scores. Fitzgibbons continued to better her position with a strong 7.07, forcing Wright to chase an excellent 8.30. On her last attempt, Wright was not able to challenge Fitzgibbons’ 14.90 combined score.

“The town of Gerroa is so small and it was well represented today in the final with Tyler [Wright] and myself, which is really cool,” continued Fitzgibbons. “Holding equal first on the rankings is a special feeling for me. It’s a long year, so I just need to keep focused and keep to my goals and hopefully hold on to the top spot.”

Defending event winner Wright had a dominating run on her way to the Final at the Drug Aware Margaret River Pro, posting a number of the event’s highest heat totals along the way. Wright’s focus and determination was evident throughout the event and she will exit with a runner-up finish.

“I was actually pretty happy with the way I ran the heat,” said Wright. “Just the waves, I thought, were a little bit trickier towards the end there and I just didn’t get a clean line, but I am stoked for Sally [Fitzgibbons] to come away with the win. I’ve known Sally since I was 9-years-old, we live in the same town now, and we are both from the South Coast. I am stoked that both of us were in the Final.”

Wright’s result will improve her ranking from 5th to 3rd on the Jeep Leaderboard. Although the 2016 WSL Champion was not able to defend her event win in WA, Wright will look to best last year’s 5th place finish at Bells to close out the Australian leg.

Fitzgibbons had the mammoth task of overcoming six-time WSL Champion Gilmore in Semifinal 2. Gilmore played a patient game waiting for the sets, but was not able to post required scores, leaving her only 0.50-points short of the heat win. Gilmore was frustrated by her performance, but will remain atop the Jeep Leaderboard.

“That really didn’t go to plan,” Gilmore said. “Before the heat, my plan was to stay really active and then once I was out there, it didn’t really work out that way. I couldn’t really find a decent wave that would offer an excellent score. In conditions like this you can’t expect to find those waves that easily, so you need to keep busy, and I didn’t do that. Third is definitely a keeper. It would be nice to win them all, that’s what we are here for, but third is definitely nice.”

On her way to the final, Wright came up against Californian Sage Erickson (USA) who had been on a tear all event. Erickson was put in a combination early, but put up a great fight to come back into contention in the second half of the heat. Erickson’s 3rd place finish matches her best result on the elite CT level and stamps her best ever finish at the Drug Aware Margaret River Pro. Erickson now moves to 10th place on the Jeep Rankings.

“It was pretty tricky out there, but there were definitely opportunities, which Tyler [Wright] took advantage of,” Erickson said. “I feel like where I fell down was letting her take good waves and not choosing the better ones myself. I never really felt in-tune with the conditions and she definitely was. This event has been a really great learning experience for me.”

With the men’s final series still remaining, event organizers will reconvene tomorrow at 6:45 a.m. local time to make the next call.

Surfline, official forecast for the Drug Aware Margaret River Pro, are calling for:

The best surf of the remaining period will occur on Sunday with strong swell and favorable wind. Saturday will see smaller, but still good size, surf in the morning along with some possible leftover lump and bump (although early morning wind should be light).

The event will be broadcast LIVE via WorldSurfLeague.com, the WSL app and on Facebook LIVE via the WSL’s Facebook page. Also check the local listings for coverage on CBS Sports Network in the U.S., Fox Sports in Australia, ESPN in Brazil, Sky NZ in New Zealand, SFR Sports in France and Portugal and as part of the EDGEsport Network.