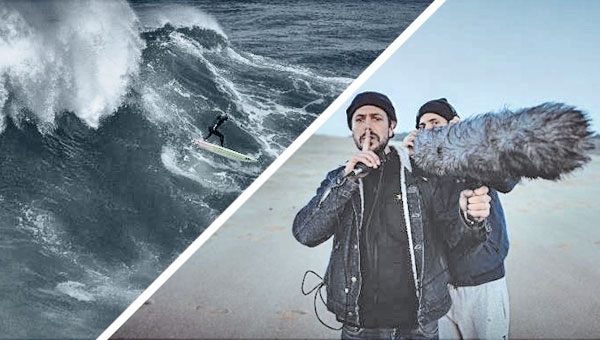 This year marks the 50th anniversary of Quiksilver. Its roots have always been firmly grounded in the surfing world, successfully combining art with performance and innovation. Staying true to these ethics, Quiksilver is supporting the first opus from the documentary series “Sounds of Surfing (S.O.S)” alongside Ed Banger and Seinheiser. Produced by LK RTEL and directed by Vincent Kardasik, S.O.S – A side : Molécule x Nazaré dives head first into the first stage of Molecules latest challenge: to compose an album at the heart of one of the worlds most dangerous waves. The unexpected combination of big wave surfing and electronic music.

The Concept of Sounds of Surfing (S.O.S)

February 2019, Nazaré: the musician Romain de la Haye- Serafini aka “Molécule” set himself a new artistic challenge.
The challenge: to record the sound of one of the biggest waves in the world, with which he would go on to create original and unique music.
His goal: to create music that emphasises the power of Nazaré, the legendary surf spot that combines chaos and grace and to source sound directly from the natural phenomenon.

Under the guidance of filmmaker Vincent Kardasik, the LK RTEL team and the worlds big wave surfing elite’s, Molecule literally submerged himself in the ocean. The Moroccan Quiksilver team surfer Othmane Choufani, accompanied him.

Over the course of this experience, Molécule completely immersed himself in big wave surf culture, learning the codes from those who take on extraordinary swells, building a bridge and uniting two universes, with one common denominator: adventure.

The release of the Molécule EP is scheduled for January 2020, as is the 26-minute documentary Sounds of Surfing – A side: Molécule x Nazaré, which will be broadcast exclusively on quiksilver.com for 48 hours. A world premiere is also scheduled.

February 2019: Recording the sound of Nazaré wave.
June 2019: Molécule composes his works at Saint Jean de Luz (Basque Country), in the Quiksilver House, with a sea view.
July 2019: Mixing session at the Quiksilver Drop-In Studio.
During the “Marées Alternatives” festival that went down on the 20th of July, Molécule and Pedro Winter aka Busy P mixed at an exceptional party.

Molécule, about this project: “Used to extreme lonely adventures, this project has brought me more than any other to my own limitations. These monumental, almost animal waves once again showed me all the power and fascinating beauty of nature. Listening to these elements is for me an almost vital, necessary need. It is also a senseless collective and human adventure where each surfer has literally risked his own life to help me capture the sounds at the heart of this monumental wave. I will be forever grateful to them: Respect.”

Vincent Kardasik, producer and movie maker: “Keeping in line with cinematographic documentaries, S.O.S is an extension of my work, with the objective of opening up the closed universe of big wave surfing and electronic music to the public, by humanising it”.

Pedro Winter, founder of the Ed Banger records label:  “I have been following Molécule’s work for a few years. Always attracted by his curious eye and his desire to surpass himself. The world is his studio, from a trawler to an igloo, we now find him at the foot of an ocean monster, Nazaré! Accompanying this kind of artist is a pleasure. I let myself be carried away right away, I already dream of us on the North Shore of Maui to meet Peahi.’’

For Othman Choufani, Quiksilver Team Surfer, the experience was totally unique “It sounds funny to say it, but we were literally fishing for sounds, to the rhythm of the big waves. I’d say what really struck us the most when we finished a session, was to hear the loud thud of the impact of the wave on the water. It was crazy to think that this project would allow us to listen to that at any time and even to dance to it!’