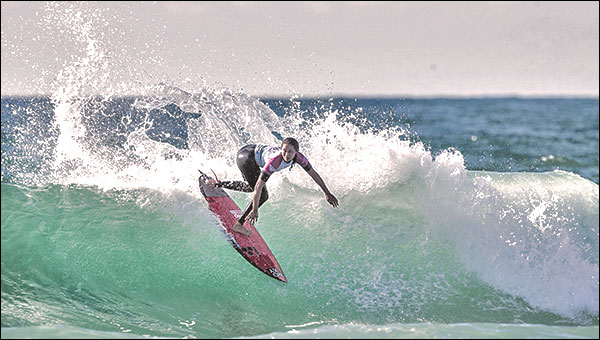 Seignosse / Hossegor / Capbreton, Landes, Nouvelle-Aquitaine, France (Thursday, October 3, 2019) – Opening Day of Quiksilver and Roxy Pro France launched today in quality three-to-five foot surf at the backup venue of Les Culs Nus. The competition ran through the opening round of both the men’s and women’s fields and showcased high-performance surfing at its finest with rail game and airs on display all day.

Stop No. 8 and 9 on the women and men’s 2019 World Surf League (WSL) Championship Tour respectively, the Quiksilver and Roxy Pro France carry both World Title and Olympic qualification implications. As expected in Southwest France, surfers had to adapt to a multitude of conditions as the peaks moved around sandbanks through high and low tides and offshore to onshore winds.

Reigning two-time WSL Champion Gabriel Medina (BRA) stamped his authority on the Seeding Round in France with an impressive display in the air to dispatch Michael Rodrigues (BRA) and wildcard Marco Mignot (FRA). Coming off a win in Lemoore, Medina showed no sign of slowing down, catching 19 waves in his heat. On his best two rides, he launched into his signature, inverted-forehand rotations and landed clean for two solid scores and the win.

“It feels good to be back in France, surfing a rippable left and getting through that first heat,” said Medina. “We’ve had a really busy last few weeks with so many events but I feel fit and I’ve got a great board under my feet. It looks like conditions are going to be fun for this event.”

Filipe Toledo (BRA) and Italo Ferreira (BRA) also advanced in first position into Round 3 as the three Brasilians are locked in a battle for the two qualifying spots into the Tokyo 2020 Olympic games. World No. 2 Toledo however had to come in a little after halfway through his heat as his back injury sustained at the Freshwater Pro a little over a week ago came back to haunt him in his heat.

“It’s a bummer especially after doing some work for a whole week with no pain,” said Toledo. “After a freesurf yesterday I woke up this morning a little sore but I went out and tried my best in the heat. Unfortunately on my first wave I felt more pain, so I’m going to go see the doctors and see what’s going on.”

Owen Wright (AUS) claimed the round’s highest single score of 8.17 for a combination of three big backhand turns, his compatriot and defending event winner Julian Wilson (AUS) scrapped through a low scoring affair and 11X World Champion Kelly Slater (USA) opened with a bang to advance into the Round of 16 after a two-year absence from the Hossegor lineup.

In the final heat of the day, local favorite Jeremy Flores (FRA) managed to turn his heat around in the dying moments to skip the elimination round, unfortunately sending compatriot Michel Bourez (FRA) in last position.

Fioravanti Makes his Comeback in France

Leonardo Fioravanti (ITA) made a flamboyant return to competition with a Round 1 win over World No. 4 Kolohe Andino (USA) and Yago Dora (BRA). While Andino and Dora took their act to the air on the rights for their best counting score, Fioravanti who knows the lineups around Hossegor as well as anyone, opted for the lefts that really stood up on the bank and offered vertical sections. The Italian built a solid 14.40 total to take the win into Round 2, Dora and Andino both with an excellent 8+ score had to settle for second and third respectively.

Women’s Title Contenders Off to a Bumpy Start in France

World No. 3 Sally Fitzgibbons (AUS) got her campaign underway in the punchy little lefts and rights of Culs Nus to take the opening heat of the Seeding Round and move on to the Round of 16. The Australian played the patient approach, only riding four waves in her 30-minute encounter with Brisa Hennessy (HAW) and Paige Hareb (NZL) and made her scores count with a best ride of 6.50.

“It’s a fun little puzzle you can’t really hear your scores out there and it’s just you and the ocean,” said Fitzgibbons. “All the girls are ripping so it great to get away with the win in this one and I’m happy I got a couple of waves.”

Things got a little tougher for the current Jeep Leaderboard No. 2 Lakey Peterson (USA) who faced off with last year’s event runner-up Macy Callaghan (AUS) and Bronte Macaulay (AUS) but the American managed to squeeze through in second position and avoided the treacherous Elimination Round.

Keely Andrew (AUS) got a come-from-behind victory in Heat 4, courtesy of a good 3-turn combo on her backhand for a 7.33. The Australian upset the 7X World Champion Stephanie Gilmore (AUS) and local favorite Johanne Defay (FRA), as the pair fought for second place. Eventually, it was Defay who skipped the Elimination Round and Gilmore will surf it for the first time since Bells Beach last season.

Roxy wildcard and former World Junior Champion Vahine Fierro (PYF) posted her first-ever CT heat win over the 3X WSL Champion and current Yellow Jeep Leader jersey Carissa Moore (HAW) in only her second time performing at the elite level. The surfer from Tahiti has been turning heads as a standout at Teahupoo and is out to gain experience against the best in the world this week.

“It’s always nice to win against the number one in the world,” said Fierro. “Waves were tricky but I got a couple of turns on the rights and it was fun. Surfing Teahupoo is definitely a scary experience and I think it prepares me for anything. I was here surfing a couple of days ago when it was big and I honestly wasn’t even scared so maybe surfing Teahupoo before every event is the way to go.”

18 surfers will be featured across two rounds. The first round will host six qualifying heats (Qualifying Rounds 1 and 2) with six surfers in each heat. The second round will be the six-person Final.

Competition has been called off tomorrow, Friday, October 4, and the next call will be on Saturday, October 5. Event organizers will assess the conditions and decide the day’s competition schedule.

The Quiksilver and Roxy Pro France will be broadcast LIVE on WorldSurfLeague.com, the WSL’s Facebook page, and the WSL app. Also, check local listings for coverage from the WSL’s broadcast partners.

Surfline Forecast for the Quiksilver Pro and Roxy Pro France.