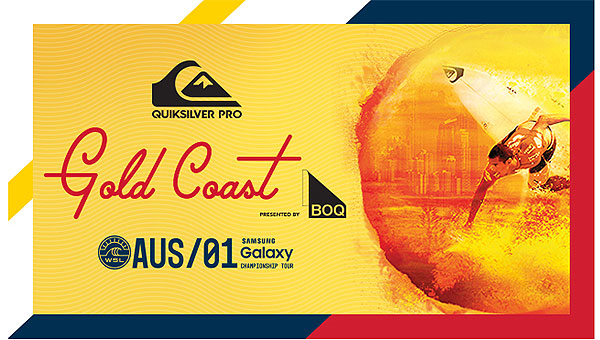 For the past 18 years, Australia’s Gold Coast will be hosting the opening event of men’s and women’s CT campaign and gathering the world’s surfing stars on its world-renowned wave “The Superbank”. Reigning world champions Adriano de Souza (Bra) and Carissa Moore (Haw) will be fiercely challenged by an amazing field of surfers in quest of earning a precious advantage towards the 2016 crown.

On the men’s side, the impressive Brazilian contingent looks stronger than ever with Quiksilver Pro Gold Coast defending Champion Filipe Toledo, 2015 World Champ Gabriel Medina as well as Quiksilver’s Wiggolly Dantas… However the Brazilian storm can expect an intense competition with many top-class rivals such as 11-time WSL Champion Kelly Slater (USA), recent Quiksilver In Memory of Eddie Aikau winner John John Florence (Haw) and Quiksilver’s Jeremy Flores (Fra). The Frenchman achieved one of his best seasons in 2015. His win in Tahiti over Gabriel Medina and a few other good results such as an excellent 3rd place in Fiji allowed him to finish in the 8th spot of the overall rankings.
Despite his decision of taking a personal year in 2016, 3-time world champion Mick Fanning will be also competing at the Quiksilver Pro Gold Coast, one his favourite events on Tour.
Another highlight of the 2016 Quiksilver Pro Gold Coast will be Kanoa Igarashi’s very first participation to a CT competition as part of the Men’s WSL Championship Tour. Quiksilver’s Californian-born surfer will be the youngest surfer on the Dream tour this season.

Quiksilver’s Mikey Wright gets the first Quiksilver Pro Gold Coast wildcard. Considered by many as the most exciting surfers of his generation, the 19-year old Australian surfer will be competing for the first time on this event.
The other wildcard will be decided during the event’s trials gathering Connor O’Leary (Aus), Leonardo Fioravanti (Ita), Zeke Lau (Haw), Kael Walsh (Aus) and Jesse Mendes (Bra) among others.