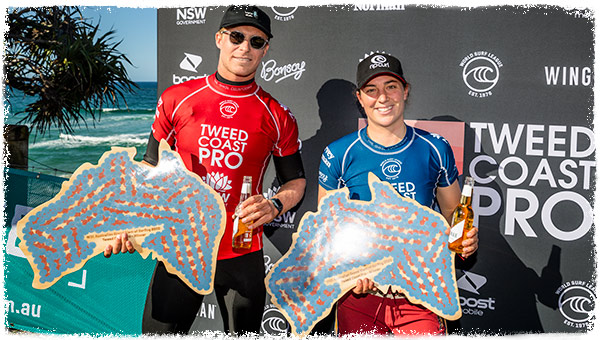 Cabarite Headland, NSW / AUS (Monday, September 14, 2020) – Tyler Wright and Ethan Ewing have taken epic victories at the Tweed Coast Pro, event one of the Australian Grand Slam of Surfing. Both Wright and Ewing looked destined for victory, each dominating the final day in fun two-to-three foot waves at the beautiful Cabarita Headland in what has been professional surfing’s return to the ocean for the first event since March this year.

In what was a rematch from the final of the Lululemon Maui Pro, the last event of the 2019 Championship Tour, seven-time WSL World Champion Stephanie Gilmore came up against two-time WSL World Champion Tyler Wright. The pair were the form surfers of the event, both posting excellent heat totals in their respective quarterfinals, the highest of the entire event. In the Final though, it was Wright who prevailed with her powerful attacking brand of surfing, dominating Gilmore with a two-wave combination of 15.67 (out of a possible 20). Wright’s performance was strong and came off the back of her powerful statement yesterday when she took a knee in solidarity with Black Lives Matter during her opening heat.

“To surf the final with Steph was great,” Wright said. “Steph’s been one of my biggest idols and is now a close friend. Through this COVID time, Steph’s been there for a lot of us and we try to surf and train together every day through what has been a tough time for all. This event also meant a lot for me standing for social justice and equality in solidarity with Black Lives Matter – It’s been a great opportunity for me to put it on surfing’s platform and I’m appreciative of this opportunity.” 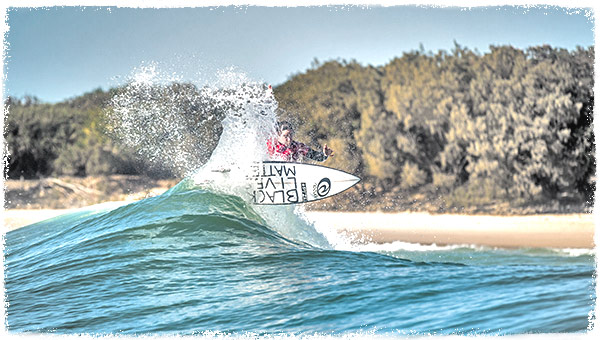 The men’s Final was an amazing glimpse into professional surfing’s future with Championship Tour comeback kid Ethan Ewing facing off with the only international competitor in the field, 2020 Tour Rookie Matthew McGillivray. Ewing dominated from the outset, posting a near-perfect 9.77 single wave score, the highest of the event, for an incredible display of frontside hacks. From that point on the 22-year-old North Stradbroke Islander had the event in the bag, making it the perfect return to the top level for one of Australia’s most promising title contenders for years to come.

“I’m over the moon right now,” Ewing said. “It’s been a great event and it all fell into place for me during that final. All-day there were really fun waves that allowed me to open up and post high scores. Matt McGillivray has been surfing fantastic so I knew I needed to score big in that final. I’m so happy WSL has been able to pull this together for us to all get back out there and compete. It’s good to be back competing.”

Although seven-time WSL World Champion Stephanie Gilmore didn’t get the win today, she was over the moon to be back in a jersey and competing in front of a global audience on the stretch of coast she grew up on and learned to surf.

“It’s been a really good event and great to get back in the jersey and meet up with all the girls and guys,” Gilmore said. “I’m happy with my result by making the final. Tyler chose great waves in that final and I probably had the wrong line-up strategy at the start and was always trying to play catch up but I’m happy with how I performed here. It’s just so good to be back.” 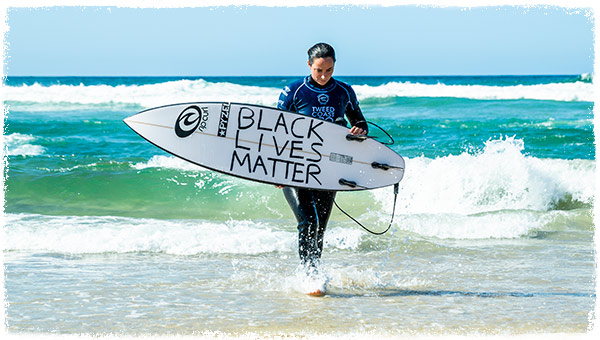 Having travelled to Australia to compete in the opening events of the Championship Tour before they were cancelled, South African Matthew McGillivray decided to hang around down under in case events were called back on. Eventually, there were no flights home and he was stuck in Australia which ended up paying off as he found himself with a spot in Australian Grand Slam of Surfing. McGillivray made the most of his opportunity, making it all the way to the Final, his second runner-up place to Ethan Ewing on Australia’s East Coast.

“I’m overwhelmed to make the finals here,” McGillivray said. “It’s been a great event and to surf against Ethan was special because we’ve met in a final before and he beat me last time as well so I’ll have to try and get one back on him soon. It was a big decision for me to stay on here and I miss my family and friends back in South Africa but I look forward to getting back there soon. Although it’s been tough the decision was made worth it with getting a spot in the Australian Grand slam of Surfing and has been a good decision for my career.”

Australian Olympic team qualifier Sally Fitzgibbons was eliminated in her Quarterfinal heat against eventual event winner Wright who dominated the matchup. Although Wright had a stranglehold on the heat, Fitzgibbons launched one of the manoeuvres of the event, landing a massive tail-high air-reverse, one of the best seen in competition.

Both of Australia’s male Olympic Team members Owen Wright and Julian Wilson were eliminated in the Quarterfinals by the eventual finalist Ewing and 2020 Tour Rookie Jack Robinson showing the future of Australian surfing is in strong hands. Robinson fell short in his Semifinal heat but was on fire all event, showing his drive in small waves is as strong as it is in waves of consequence.

Young guns Molly Picklum, Isabella Nichols and Zahli Kelly all put up a solid showing at Cabarita headland but all went down in their Quarterfinal Heats.

All eyes will now be focussed on the forecast for the Boost Mobile Pro Gold Coast as the Australian Grand Slam of Surfing continues for the coming weeks.

The Australian Grand Slam of Surfing, part of The WSL Countdown, will see 24 of Australia’s best surfers (12 men and 12 women) go head to head in their respective divisions. 11 male CT competitors and 8 female CT competitors will be on standby for each stop, some looking to compete for the first time in 2020. The remaining spots in each field will be allocated to the highest ranked 2019 non-qualifying Australian surfers or selected wildcard surfers.

The broadcast-only ‘strike mission’ style event, not designed for spectators due to COVID, will see competitors given just four days’ notice within the competition window, to travel to each location to compete over two days. Surf conditions will determine which location is surfed and when to make sure surfers compete in the best conditions possible.

Adding to the high stakes, men’s and women’s overall series champions will each win $20,000AUD to donate to a charity of their choice.

The Australian Grand Slam of Surfing will run across the nation between September 13 and 14 and be broadcast live on worldsurfleague.com, Channel 7 (7Plus), Fox Sports Australia (Kayo) and Sky Sport NZ.