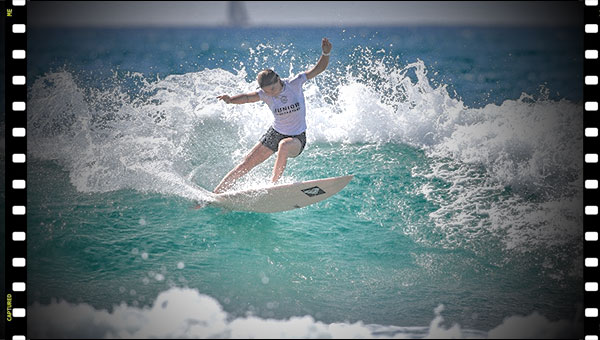 The Roxy Junior Pro 40 wrapped up today in excellent waves again in Capbreton. With European junior titles on the line, the tension was maximum on finals day and the heats didn’t disappoint.

The women’s Final was an interesting matchup of two surfers who are destined to do great but haven’t really capitalized so far this year. Juliette Lacome leads the next generation of French surfers but with two equal fifths early on this year, and missing the third event, she was at a disappointing 12th on the regional rankings.

Melania Suarez Diaz came out of nowhere last year when she won the opening event of the season in splendid fashion and has since then been on our radar as the next super talent hailing from the Canary Islands. But as she slowly fell down the rankings throughout 2018 and the beginning of this year, doubts started to arise.

Both surfers fought hard to reach the Final in Capbreton as they eliminated the current leader and number 2 in the European title race respectively in the Quarters and fully deserved the honors. The Final was a blow-for-blow battle in the fun little rights of low tide Santocha, but Lacome’s approach on her forehand was just too good and she claimed the win with an impressive 15.40 total.

“I’m super happy with my result today,” she said. “Waves were excellent this week so I had a lot of fun. I started really bad in the first few events so it’s great to get a big result and I hope I can do as well or better in the final event.”

With two more seasons in the juniors though, there’s plenty more time to achieve big success for the young Canarian.

Surfers will now have until mid-September to train for the final event on the 2019 European Junior Qualifying Series, the Ribeira Grande Pro Junior in the Azores.